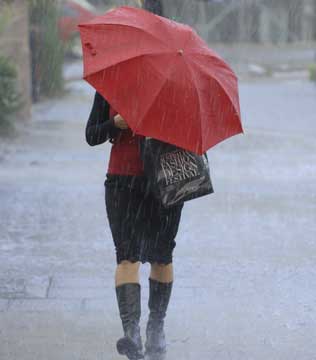 During the last few days heavy rain and storms have been flooding parts of Western Australia, with the Gascoyne region the hardest hit during the past 24 hours.

The trough that brought record February rainfall to Warburton on Friday has weakened, but not before dropping an additional 34mm on the already flooded region.
Another trough over western parts of the state has been drawing tropical moisture south from the intensifying monsoon trough. This has increased the rain and storm activity, especially over the Gascoyne district.

Some areas have seen over 100mm during the past 24 hours. Meekatharra received 100mm to 9am, their heaviest February rain in 66 years of records. Madoonga was awash with its second heaviest total in 85 years of records, picking up 150mm.

For the remainder of the weekend, scattered storms will continue to fire up over western and northern parts of the state, but are unlikely to bring totals as large as those seen in the last few days.