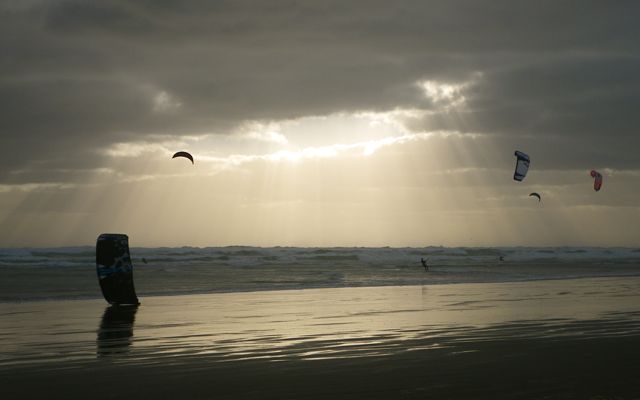 Western and southern parts of the South Island should see the most action today with changeable skies and windy conditions pushing in from the south seeing the mercury plunge from where it was over the weekend.

blustery nor’ west winds took hold of much f the south yesterday and temperatures in a number of cases from invercargill to kaikoura were five to ten degrees above normal.

Temperatures in eastern areas have been near record highs for the last week of April by soaring into the mid twenties.
Overnight and a blustery nor’ wester saw Christchurch with 21 degrees at midnight and 22 degrees at 2am.
Today could also see further warmth as the west to nor’ west flow continues for the city and over parts of the nation.

“The weekend saw a taste of summer returning for many places and yesterday three quarters of the country were in the twenties which is a rare occurrence for the time of year” says weather analyst Richard Green. “It felt as if we’d wound back the clock a couple of months and many people hit the rivers and beaches to take advantage of the last kick of summer-like warmth”.

WeatherWatch believes what was unusual was that the warm weekend we’ve just experienced followed hot on the heels of the wettest weekend of the year with cold temperatures across Canterbury, Otago and Southland.

“We are going back and forth quite a bit with the weather pattern but what is consistent is that fronts, lows and anticyclones are all wrapped up in one big picture and endless sunshine doesn’t seem quite so likely as we head towards winter” says head weather analyst Philip Duncan.

Long range models see the chance of a significant depression moving towards New Zealand this coming weekend or early next week delivering moderate rainfall totals for much of the country however possibly only lighter falls about Gisborne, Hawkes Bay and the Wairarapa.

A cooling trend is likely to move in firstly across the south today and then tomorrow and Wednesday for the country as a whole while the south to southwest flow rolls in.Thundery downpours over parts of Firodland Westland are expected to come and go however a southerly is likely to bring in cold, showery skies for parts of Otago and Southland with some big gusts bringing hail to isolated areas.

Later in the week milder northerlies are set to return and cover much of the country ahead of a more widespread colder southerly outbreak  across the south over the weekend with snow levels lowering.