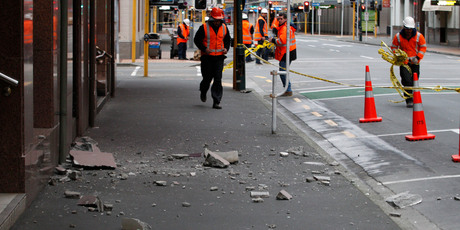 A series of strong earthquakes have rocked the capital again, the strongest a 5.7 magnitude shake centred in Marlborough.

For the latest raw data from Geonet, click here.

Geonet says the first earthquake, which was felt strongly in Wellington, was recorded at a depth of 8 kilometres, 10 kilometres south-east of Seddon.

Mass power cuts are being reported in the upper South Island.

Marlborough Lines says its teams are assessing which areas have been worst hit and will then start trying to restore electricity but is asking customers to be patient.

The quake, which is classed by Geonet as “severe”, was felt as far north as Hawke’s Bay.

The police communications centre says there have been no reports of injuries so far.

There were reports of a house collapsing in Nelson after the quake.

Ambulance central communications said they had yet to receive any calls related to the earthquake.

TranzMetro said it had immediately stopped all train services in the capital.

Wellington’s railway station had been evacuated.

A fire communications spokesman said so far there had been no reports of damage in Wellington, just alarm activations around the city. There is also one person stuck in a lift.

There were reports power was cut in the suburb of Karori.

Twitter users said they felt the quake as far away as Auckland and Christchurch.

Cellphone coverage is out in Wellington. All Tranzmetro services are currently suspended

Reports posted by Twitter users said the quake was bigger than the last one that rocked the Capital in July.