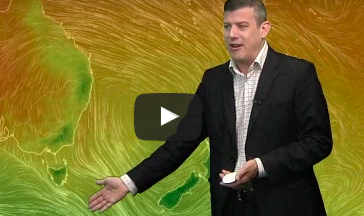 A large high is rolling in to the country for Saturday – and not just some regions, it appears all of New Zealand will be covered in high pressure limiting the windy weather and keep temperatures a little cooler at night but a little warmer during the day.

Saturday looks mostly dry but there may be a few cloudy areas.

By Sunday a deep low in the Southern Ocean which surge northwards close to the South Island, bringing a burst of wind to eastern and central areas (including Wellington) and rain to the West Coast.