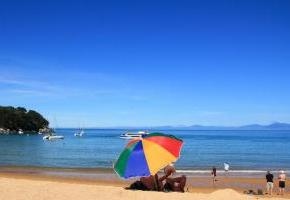 This weekend the weather is shaping up to be pretty good around New Zealand with warm weather on the way for many. In the far south on Sunday conditions start to deteriorate a little during the day.

Saturday has an anticyclone covering much of the North Island and the flow will be light from the south or southeast. So everywhere out west is looking good and temperatures will be upwards of 26 or 27 degrees in some places. On the east coast there is likely to be some cloud although Wairarapa may see sunny spells.

In the South Island a northwesterly airflow starts to build so sunny warm conditions out east are on the cards although right on the coast about Canterbury a northeasterly breeze may keep temperatures relatively a little cooler then surrounding parts till evening when it dies away.

Out west in the South Island conditions are looking fairly reasonable although cloud will start to push up the West Coast later during the day, Southland and Otago will see high cloud with northwesterlies.

Sunday sees a similar pattern over the North Island however this time there may be a few light showers about Gisborne caught up in a southeasterly airflow there. The South Island is looking quite reasonable also with warm temperatures for the upper half, over the southern half a front slowly moves over during the day and is likely to bring cloud and some showers.

Saw similar story on Stuff an hour or so ago. Based on a press release from another weather source.