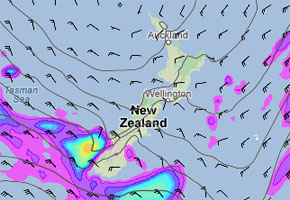 So it is mid week and our attention turns to the weekend and how it is shaping up. I think it would be a reasonable expectation to not get too excited for the first few days of summer but Saturday isn’t shaping up too badly and Sunday will be ok for those living in the east of both islands.

Saturday sees an anticyclone just west of the North Island progressively getting pushed northwards during the day by an increasing westerly airflow over the country. West to northwest winds will get quite strong over the South Island with rain developing on the West Coast, fine weather and increasing high cloud is likely out east.

For the North Island expect westerly breezes, a mix of sunny areas and some cloud in the west with sunny warm weather on the east coast.

Sunday will see fairly breezy westerly winds moving onto the North Island with increasing cloud for most during the day, showers move into western areas later in the evening. Out east expect high cloud. In the South Island rain remains on the West Coast easing to showers later with some high cloud from about Canterbury northwards in the east, strong northwesterlies ease about Marlborough in the evening.

Temperatures may be quite warm about Canterbury in the afternoon on Sunday as high cloud clears away in the afternoon. About Otago and Southland winds will tend west to southwest with sunny areas and some cloud expected, conditions will be mostly dry however there may be the odd shower on the southern coastline.