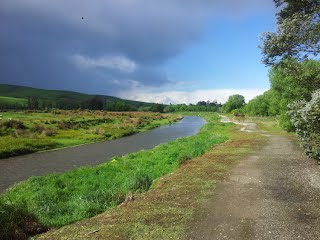 An incoming low which is continuing to deepen is set to dominate our skies this weekend and Sunday overall is looking the dampest.

It might take time before it’s fully engaged but most parts of the country will be under its influence if not during Saturday, it’ll be more than noticeable on Sunday.

Much of the South Island will see it intrude during the early part of the weekend but thick high cloud could just hang in across eastern areas until later in the day before giving way to some rain at night.

Nor’ east winds are likely to increase across the south later on Saturday and feel chilly in places from Kaikoura to Dunedin but also pushing into inland areas as well.

The North Island is looking largely dry on Saturday as a ridge of high pressure holds on but Sunday that depression will work its way across the island. The afternoon and evening has the island almost completely engulfed with north to northeast winds strengthening and a band of rain however temperatures will be slightly higher than usual for mid June.

Moving into next week and Monday sees most of the wet disturbance hanging about western regions as the low feeds in with a light but moist west to nor’ west airflow.
Tuesday continues to look patchy across the nation as the low gradually moves over New Zealand and showers are likely across many regions.
Wednesday doesn’t offer a lot of respite either but the upper half of the North Island is mostly free of showers and should be mainly dry.
South to sou’ east winds appear to tackle us over much of Thursday with showers or rain about the east of the South Island and much of the North Island with a clearance expected over western districts.
Friday looks to have an anticyclone gradually working its magic over western areas but the crisp southerly probably won’t leave our eastern shores until the weekend gets underway.

These two days look brighter overall compared to this weekend approaching with a high being the main feature and any remaining showers should clear from Gisborne and Hawkes Bay.
Sunshine for most areas on Saturday is anticipated however showers could move over the South Island on Sunday thanks mainly to a weak front pushing across the Mainland.

The early to middle stages of the following week sees another low take aim at the North Island and northern half of the South Island with the potential of reasonable rainfall totals over a 2-3 day period.
WeatherWatch is keeping a close eye on this development at the moment.

Thne All Blacks are tackling France tomorrow night in the second test in Christchurch. Weather conditions will be cool to cold with some rain by kick off time (a 60% chance at the moment) with winds increasing.