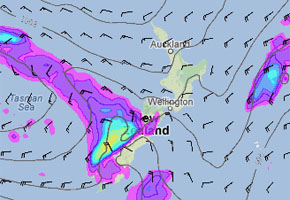 This weekend will be the last of our spring like pattern till anticyclones dominate next week. Saturday a front approaches the South Island then on Sunday it moves over the North Island early in the day while a southwesterly airflow then lies over the South Island. So for a look in more detail.

This coming Saturday isn’t too bad. Westerlies will flow over the North Island and skies should be mostly sunny with a few areas of cloud, cloud will be a bit more persistent from Taranaki through to Wellington however and in the evening cloud increases in all areas in the west but otherwise it’s looking like a fairly good day. The east coast as it has been many times this year will be sunny and warm.

In the South Island cloud will do it’s typical cover much of the West Coast thing and bring showers there in the afternoon, some rain for Fiordland then clearing most of the West Coast at night as the front passes. On the east coast a warm day with northwesterlies and high cloud can be expected, southerlies develop about Southland from midday and spread into Canterbury and Marlborough during the evening bringing some cloud and the low risk of a shower however.

Sunday sees the front mentioned above move over the North Island early in the morning so expect a few brief showers at first especially in most western areas then some sun in the afternoon with breezy cool southwesterlies. Eastern areas may remain dry however plenty of cloud is likely with southerlies for most of the day then easing in the evening.

The South Island is looking mainly sunny on Sunday with light winds from Nelson down through to Canterbury, a southerly breeze may sneak into Canterbury again in the evening however nothing should come of it. Southland, Otago and the West Coast will see west to southwest breezes with sunny areas and some cloud, expect the odd shower at times mainly about Southland and Fiordland.