Home > News > Weekend Low heading towards the North Is... 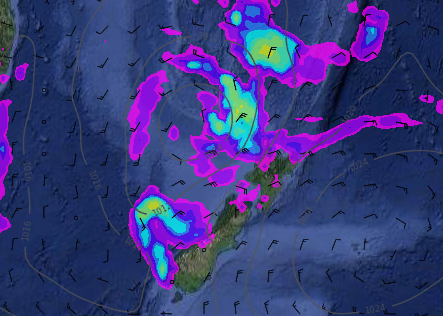 A low pressure system is this weekend expected to move into the North Island bringing an increase in humidity, cloud and then rain. WeatherWatch.co.nz says the low is not a storm but due to it connecting with sub-tropical air and pulling that down to northern New Zealand there is, once again, the chance of localised heavy downpours.

While it’s too early to lock in flood risks any sub-tropical set up generally does bring a chance of localised flooding for northern New Zealand. The issue with long range is that we can’t work out if these potentially heavy downpours will be over land or out at sea, but the low is likely to make ‘landfall’ in the North Island later on Sunday bringing a period of rain to a number of regions.

Meanwhile the South Island has high pressure trying to push back against this low. It means there may be some patchy rain for northern parts like Nelson, Blenheim or north of Westport.

But over the weekend Saturday’s southerly flow will give way to a cloudier, more humid and drizzly north to north east flow on Sunday.

Late Saturday or across Sunday will be wettest in the North Island too, with heavy falls possible in the northern half coming in from the north and west.

On Monday the low unravels over the North Island bringing patchy rain and dry spells to the island and the South Island drying up.

Humidity levels will go on the rise too – which will be of some concern for farmers dealing with facial eczema.

The precise times and exact locations of rain may change in the coming days as we fine tune this forecast. Please check back for our daily news updates on the Weekend Low and of course our rain maps – plus the % of rain in our 1500 forecasts.