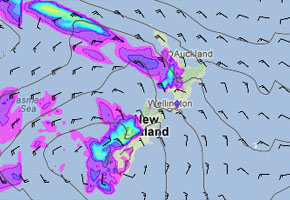 Yes it’s the weekend and on que time for another low pressure system and associated front to cross the country, “hooray!” I hear you all exclaim. Well ok a bit of sarcasm there but now for the more serious information.

Friday sees a front move into the Tasman Sea from south of Tasmania, a northwesterly airflow begins to build over the country later in the day. Saturday has the front crossing New Zealand, western areas of both islands are likely to experience and receive most of the wet weather in the form of rain.

Sunday has the flow changing to the southwest brining cooler temperatures, showers are likely in most regions again however they will ease. A few showers will spread north along the east coasts of both islands during the day.

On Monday higher air pressures may bring some relief in the form of more settled weather.

WeatherWatch.co.nz analyst Aaron Wilkinson notes, “This low pressure system is not likely to bring any major severe weather however rain warnings are possible in the west of both islands for Saturday, also gale northwesterly winds may affect from Cook Strait through to Gisborne on Saturday preceding the front moving through on the day”.