Week to start off sunny, end with rain 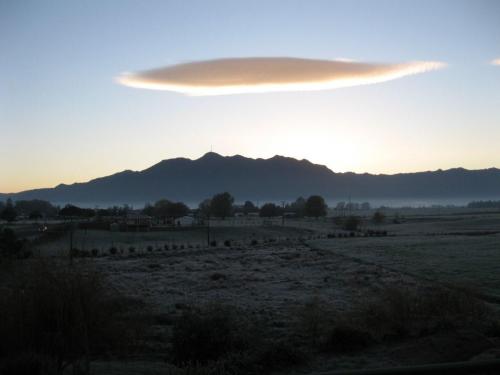 The cold frosty weather will continue for most places this week but the squeeze is on at either end with frosts becoming confined to more central regions as the week progresses.

A large low to the north east of East Cape will bring south easterlies across the northern half of the North Island while a front in the south will brush Southland and coastal Otago bringing clouds and a few showers in on Monday and Tuesday.

Frosts will mostly remain between Canterbury and Waikato where the high is centred and skies are clear with little wind.  Frosts are expected to be severe in sheltered, inland, areas for the next couple of nights.

But a larger front is on the way at the end of the week from the Tasman Sea.  The front, attached to a deep low, is currently hitting southern Australia.

The front is likely to bring torrential rain to the West Coast later this week and by Thursday, Friday and Saturday it will bring clouds, wind and rain or showers to much of New Zealand.

MetService indicates rain will be heavy enough to possibly prompt rain warnings on the West Coast.

WeatherWatch.co.nz says there is no indication that any polar blasts will hit New Zealand in the next 10 days.  So far this year New Zealand has escaped any severe national wintry blasts.