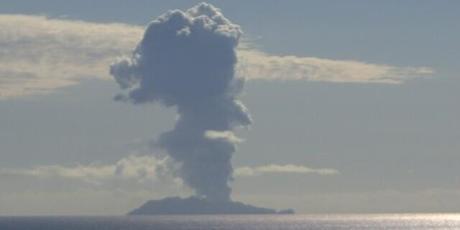 The week started with a bang – as White Island erupted around 10.20am on Tuesday, causing the volcanic risk level to be raised to 2 – meaning it was classed as a ‘minor eruption’.
GNS Science volcanologist Nico Fournier said the eruption continued for about 10 minutes, and produced mainly steam.

The weekend’s earthquakes in the centre of the country prompted a warning from Civil Defence against people moving outside quickly after an earthquake.
CD Emergency Management Director, John Hamilton, warned that after an earthquake, it’s safer to follow your building’s emergency management plan rather than head outside.
He warned that it was imperative for all workplaces to have a plan in place, and building managers could access CD’s guide for creating a plan on their website, civildefence.govt.nz

Antarctica NZ sent us some pretty amazing pictures of the first sunrise this winter, after weeks in nearly total darkness. Check out the pictures, here.

Taiwan was hit by a severe Tropical Storm named Trami, closing schools and businesses as winds of more than 100km/h buffeted the northern part of the country.
This scary video was taken by passengners aboard a bus, trying to traverse the flooded Taiwan streets.

And finally, farmers in the Waikato are smiling through this winter, as grass growth continues steadily through the traditionally barest period of the year.
Tatua Dairy co-operative is reporting record volumes coming through its doors, as farmers make the most of good pasture.

Let us know what you think about a busy week in the comments below.

An interesting compilation of events Drew! Pleased for the farmers that grass continues to grow. Alas frosts later in the year will stop that!
Images from Antartica, sure must be a treat seeing sunrise after the total dark winter.