Week ahead gets pass mark 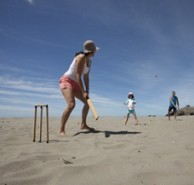 It’s the last full week of the school holidays for many primary school children and today the skies should be mostly dry to kick it all off.

You’re going to have to be fairly unlucky to cop a shower as they’re mainly expected to fall over central parts of the North Island this afternoon or could develop as late as this evening.

Cloudy areas could develop across some eastern coastlines of the nation and a rogue shower might also pop up across remote areas over the south first thing this morning.

The week ahead doesn’t appear to pose too many problems but a frontal system is expected to move across the country midweek with a band of cloud and showers or even a belt of rain in the west.

“These fronts at the moment don’t appear to be that ominous and it’s always a gamble how much rain will fall” says weather analyst Richard Green. ” Much of the week is looking fairly settled and temperatures in eastern and northern areas ahead of the incoming front are looking warm to hot” he says.

WeatherWatch.co.nz believes Christchurch could be up near 30 degrees on Wednesday and it’s hit that mark many times this summer.
“The Garden city has been on a pretty good run this summer with eight days now eclipsing 30 degrees with another one hit yet again on Saturday” says Mr Green.
“This time last year it hadn’t happened at all.It’s nothing like what some of the Australian cities have seen this season but it’s been an impressive effort however grass and scrub fires have been the downside of it across  the city surrounds” he says.

Australia and southern cities are likely to feel the heat again this week with the mercury climbing into the low thirties and very warm winds moving out of the desert.Inland parts of New South Wales, South Australia and Victoria are likely to see thermometers around the 40 degree mark for much of the week.