Week ahead dominated by westerlies 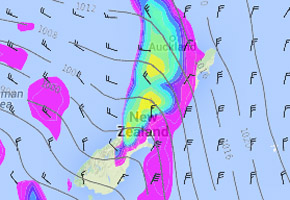 The week ahead will likely be dominated by a westerly quarter wind flow, and within that flow 3 fronts move through. These fronts affect western areas the most in terms of rain, eastern areas are drier but as the fronts pass over some rain may move through for a brief time. For todayâ€™s weather check out this mornings forecast here.

On Tuesday a northerly airflow increases across the country with strong winds possible overnight about the west of the North Island and east of the South
Island. Mostly cloudy in the west of the North Island with morning showers about Auckland, Northland and Taranaki clearing. Sunny in the east with some high cloud developing from afternoon.
Cloudy across most of the South Island, drizzle in the west turns to
rain in the afternoon which may then become heavy later. Patchy rain or drizzle
about Nelson most of the day, dry along the east coast and for
Southland.

On Wednesday expect rain for most western areas of the North
Island as the first of this weeks fronts moves in, easing late afternoon as
gusty northerlies change westerly. Thick high cloud in the east with a few
spells of rain moving through in the evening for a time. Morning heavy rain
about Nelson and on the West Coast eases to showers around midday as gusty
northeasterlies change northwest. The east coast has thick high cloud in the
morning with a few spells of rain, brisk north to northeasterly winds. Sunny
areas increase in the afternoon with winds tending northwest.

The second front of the week moves in on Thursday, not as menacing as Wednesdays front but
still wet in areas. Cloudy spells for the west of the North Island, some rain
moves through from late morning then clearing by evening, northwesterlies change
westerly afternoon. Mostly sunny on the east coast with some high cloud from
afternoon, a few spits of rain possible later in the day.

Rain for the South Islandâ€™s West Coast eases around midday to the odd shower as
northwesterlies change southwest. Morning high cloud on the east coast clears
away to a mostly sunny afternoon, northwesterlies ease and tend southwest by
midday.

Finally on Friday the last front of the working week moves through, yet again from the west. So western regions of both island can expect a wet day while out east expect sunny areas and high cloud. A few spells of rain
may spread into the North Islandâ€™s east coast later in the evening for a time.