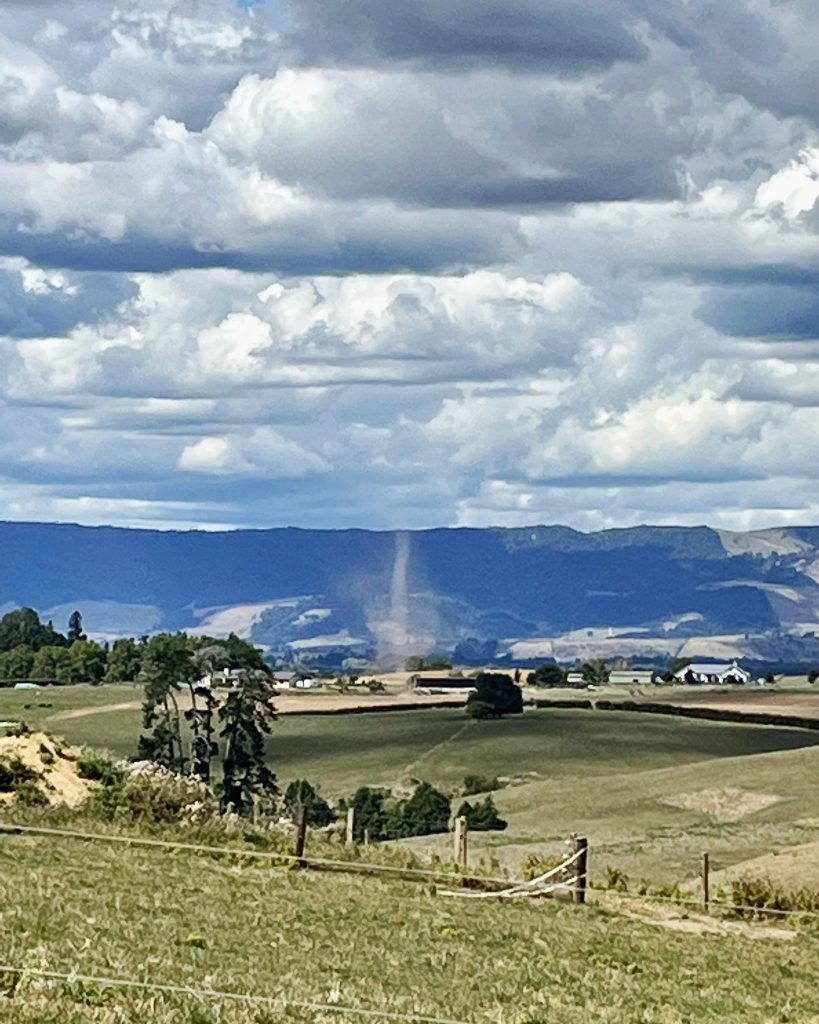 A big dust devil appeared in Matamata yesterday and was photographed by Dairy Farm Manager Sam Owen. Sam said about the dust devil on Twitter @samueltowen

“Neighbours got a little tornado on his hands by the looks. Moving across freshly chopped maize ground. So cool to watch”.

Dust devils are a common wind phenomenon that occurs throughout much of the world. These dust-filled vortices, created by strong surface heating, are generally smaller and less intense than a tornado. Typical diameters of dust devils range from 3 to 90 metres, with an average height of approximately 150 to 300 metres. In most locations, dust devils typically last only a few minutes before dissipating. Although, in deserts typical of northern Arizona, dust devils can reach heights of 600 to 700 metres and last on the order of an hour or more. Wind speeds in larger dust devils can reach 100 km/h or greater. Even though they are generally smaller than tornadoes, dust devils can still be destructive as they lift dust and other debris into the air. Small structures can be damaged, and even destroyed, if in the path of a strong dust devil.

Click here (Facebook link) or here (link to stuff.co.nz) for a few videos of a destructive dust devil that went through Cromwell on January 11th 2017.

COOL IN THE EAST TODAY

If you live in the eastern South Island, temperatures will feel a little cool today. High’s between 13 and 15 degrees are likely from Dunedin up through to Kaikoura. Blenheim and the eastern North Island are a little warmer and reach between 18 and 20 degrees.

Out west is warmer, we have a high of 24 degrees for Reefton, 23 for New Plymouth, 26 in Hamilton and Auckland.

INSTABILITY POSSIBLE FOR THE WEST COAST ON FRIDAY

There is a touch of instability due for the West Coast this Friday, the result of some cold upper air and converging winds at the surface. This may lead to a few isolated showers in the afternoon with the low risk of a heavy fall and perhaps a thunderstorm or two.