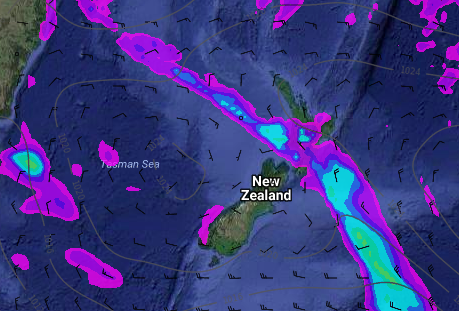 A cold front today moves into the North Island slowly while high pressure builds over the South Island behind it, settling things down after a couple days of wet weather in the west and wind elswhere.

Northland, Auckland, Waikato & Bay Of Plenty
A mix of sun and cloud and mainly dry with north to north east breezes.
Highs: 22 to 25
Eastern North Island
A hot day with northerly quarter winds, norâ€™west for many. Mostly sunny.
Highs: 22 to 27

Patchy areas of rain with a couple isolated heavy falls, easing towards the end of the day. Light winds from the NW.
Highs: 18 to 21
Wellington
Cloudy with showers or patchy rain early on, then becoming dry with sunny spells later. Winds fading out.
High: 20

Marlborough & Nelson
A warm day with a mix of sun and cloud with light winds.
Highs: 22 to 24

Canterbury
Dry with light winds from the east.
Highs: 19 to 21

West Coast
A mix of sun and cloud with light winds.
High: 19

Southland & Otago
Dry or mainly dry with light winds. A cooler day than Tuesday was. Light winds from the west.
Highs: 14 to 20