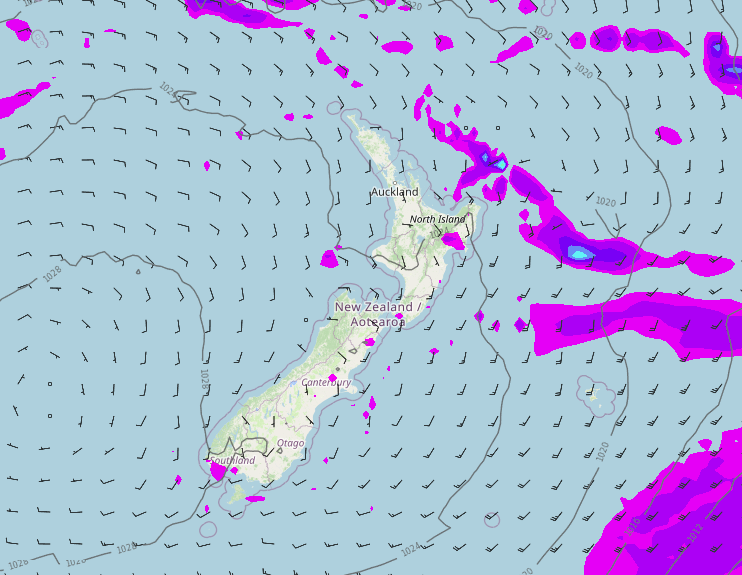 An anticyclone starts to move in over New Zealand today bringing in mainly settled weather, however there is still some cloud and a few showers for eastern regions to deal with. Conditions are sunnier out west.

Northland, Auckland, Waikato & Bay Of Plenty
A mix of sun and cloud with southwesterly winds, a few showers develop for Bay Of Plenty in the evening then Coromandel by midnight as winds tend to the east.
Highs: 18-21

Marlborough & Nelson
A mix of sun and cloud, a cold start inland. Southeasterlies tend to the east around midday.
Highs: 16-18

Canterbury
Sunny at first then mid morning winds tend to the south and cloud thickens. A light shower possible, mainly out on Banks Peninsula. Cloud breaks away at night.
Highs: 15-16

West Coast
Sunny, early fog for Reefton. Cloud later in the day for Buller and spreading into North Westland from the north, perhaps a few light showers overnight. Light southerly quarter winds tend to the northeast after midday.
Highs: 17-19

Southland & Otago
Mostly cloudy with a few showers, thinning out in the afternoon and gradually clearing, some sun late in the day. Sun may break through from afternoon for Central Otago. Southwesterlies die out later in the day.
Highs: 14-16