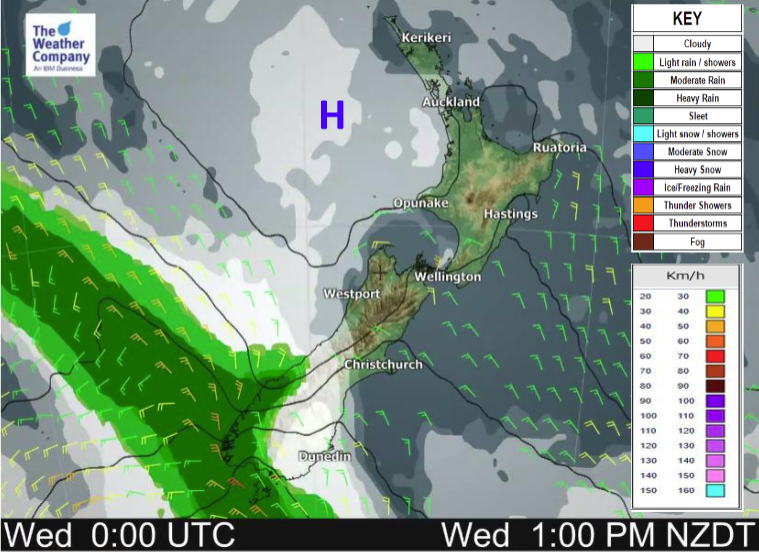 A high pressure system lies to the north today and approaching from the south is a cold front, in between we have a very warm westerly quarter airflow over the country.

Most places around the country will be dry today apart from South Westland, expect showers then heavy rain moving in from afternoon. Showers move into Southland and Otago late afternoon / evening.

Most of the country can expect warm temperatures, hot in the east especially for the eastern North Island. The West Coast south of Hokitika experiences the coolest highs.

Winds are moderate for most however through the Southern Alps, Cook Strait plus coastal parts of the lower South Island winds may be gusty or strong at times.

Wellington
Some morning cloud then mostly sunny, a touch of high cloud later in the day. Gusty northerlies.
High: 23

Marlborough & Nelson
Sunny and hot (especially about Marlborough), some high cloud later in the day. North to northwesterly winds.
Highs: 28-34

West Coast
Mostly sunny north of about Greymouth with some developing high cloud, cloudier skies further south with showers for Fiordland. Heavy rain moves into Fiordland during the afternoon then slowly pushes northwards in the evening. Northwesterlies.
Highs: 19-29