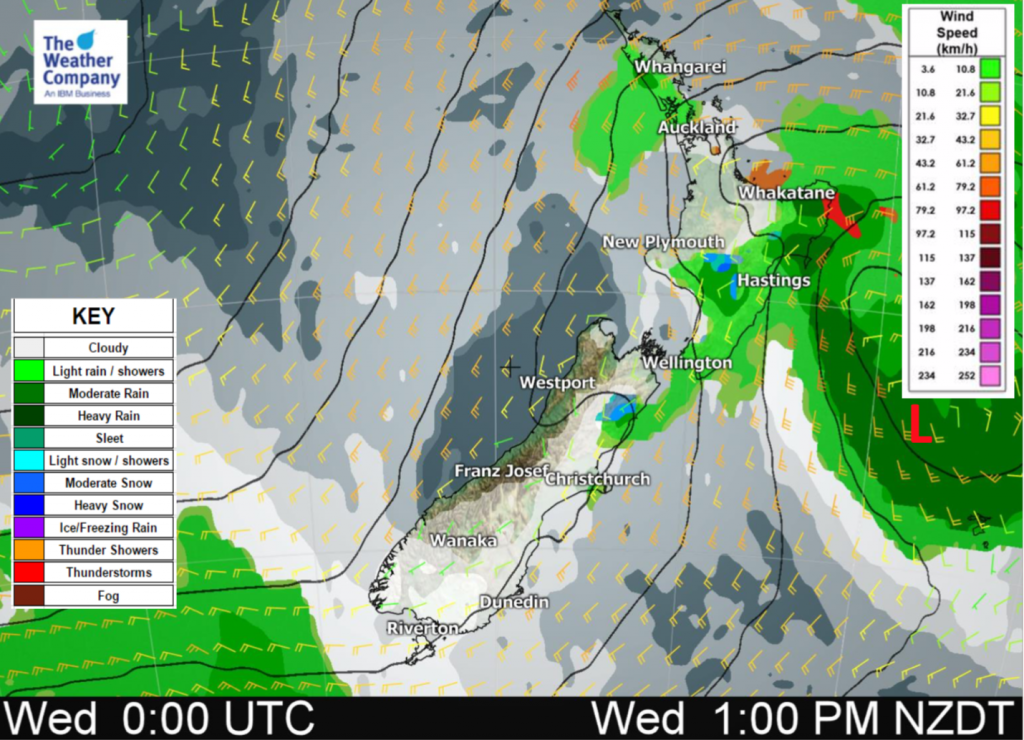 Northland, Auckland, Waikato & Bay Of Plenty
West to southwesterly winds, strong to gale force about Northland and especially Auckland in the west. Showers, heavy in the morning with a risk of hail then easing. Becoming dry in the afternoon for Waikato and Bay Of Plenty. Winds easing in the evening for all.
Highs: 14-16

Eastern North Island
High cloud, may be a spit. Rain about Wairarapa spreads into Hawkes Bay and Gisborne during the morning as a strong southwest change pushes through. Rain may be heavy with some hail then clearing in the evening. Snow lowers to 500m about the ranges before clearing.
Highs: 12-15

Marlborough & Nelson
Early heavy rain about Marlborough with a risk of hail then clearing (snow to 500m), sunny areas increase from afternoon. Gusty southerlies die out in the evening. Nelson becomes mostly sunny in the morning, southwesterlies ease tending northerly in the afternoon.
Highs: 13-16

Canterbury
Morning showers and snow to 300m Rakaia northwards, possibly heavy with hail then clearing in the afternoon. Strong southwesterly winds (risk of gales on the coast) die out in the evening. Conditions clear south of the Rakaia river.
Highs: 10-12

Southland & Otago
Morning showers with a few snow flurries to 300m clear then expect sunny areas, southwesterlies tend westerly in the afternoon. Later in the evening or overnight a gusty southwest change brings some rain.
Highs: 11-13