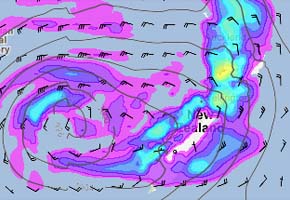 Tomorrow is still looking a bit dull across most of the country but there will be some areas of sunshine. There will be some sun to start in the North Island however showers develop in the morning in Northland spreading east during the day getting into eastern Bay of Plenty and the Central North Island late afternoon or evening. It is expected to be a nice day on the east coast with light winds, some morning cloud and possible showers about Wairarapa will clear.

Morning rain will ease in most of Canterbury to showers clearing around midday, sunny breaks develop into the afternoon with northeasterly breezes. Showers about coastal Otago and perhaps South Canterbury hang on a bit longer clearing late afternoon. On the West Coast expect mostly cloudy skies although there may be some sunshine about South Westland to start. Showers in Buller spread to other areas around midday as the flow turns more westerly.

Expect wet weather in Nelson for much of the day with north to northeasterly breezes.

There should be a reprieve for eastern regions in the South Island from Thursday through to Saturday with mostly sunny weather expected and light northeasterly breezes. A low that initially was showing a track south of New Zealand moving east for this coming Sunday is now set to develop west of the country as noted in this mornings article, we could well experience much of the same as we have had with previous lows recently, heavy rain in the North Island then moving to the east in the South Island.