Home > News > Wednesday: NZ in the calm between two st...

Wednesday: NZ in the calm between two storms 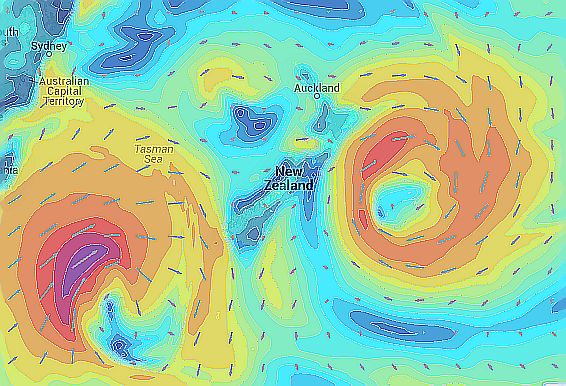 New Zealand will lie between two storm systems Wednesday: Ex-cyclone June to the east of the country and a deep Southern Ocean low to the south west.  While Wednesday will be hotter, sunnier and drier for many regions the forecast for Thursday isn’t so flash as low number two barrels into the South Island and falls apart.

“This next low will push in later on Wednesday in the South Island with hot nor’westers forming in the north and east and perhaps some late showers for the south” says head weather analyst Philip Duncan.  “And if you’re in Wellington the flip flopping spring-like wind directions will continue with Tuesday’s southerlies turning into Wednesday’s northerlies which will then become strong across the afternoon, but by Thursday evening will turn southerly again ahead of swinging back to northerlies on Friday and the weekend”.

Mr Duncan adds the winds will continue to swing from strong to light too, as these low pressure systems roll past New Zealand.

“The next two or three days will be windy across a number of regions, bringing scorching temperatures to some in the east but perhaps below average for some in the south and west of the nation”.

The winds across Wednesday are likely to push highs in the east of both islands into the mid twenties to early thirties.

Our Southern Ocean low may currently be stormy but it’s unlikely to bring severe weather to New Zealand, just more of the same unsettled weather, strong winds and changeable temperatures South Islanders and Wellingtonians have become used to this summer.

This weekend a high pressure system will roll in across the country bringing mostly dry and warm to hot weather.

At this stage Auckland Anniversary weekend will have two mostly dry days, but there still remains a 60% chance of rain or showers on Monday.