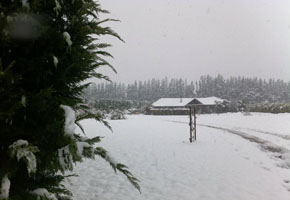 Rain tonight for most of the South Island, heavy at times with snow to low levels, possible sea level in the far south. Southerly winds strengthen. For the North Island the east remains mostly dry but heavy showers pepper the west mainly north of Taranaki with a chance of thunderstorms, hail is possible too but mainly overnight.

Northland, Auckland & Waikato
Showers, some heavy at times with a risk of hail. Could be a thunderstorm or two out there also. Strong gusty westerlies develop later.
Lows tonight: 7-11

Central North Island, Bay Of Plenty
Showers, one or two may be heavy with a risk of hail. Gust westerlies develop later.
Lows tonight: 7-11

Poor forecasting for you guys?
600 metres with all the information you have in front of you?
Already snowing heavy at 300 metres in Canterbury and reports of snow even lower.

Thanks for your comments

To true it has started falling lower then initially suspected.

With one of maybe the most significant storms for this year on our doorstep and the taxpayer funded metservice web site was out for a couple of days then I it came back, now its out again! Useless! Thanks weather watch, at least it seems we can rely on you for up to date and accurate info, it does highlight the stupidity of the powers that b not to share info with you tho.keep up the good work