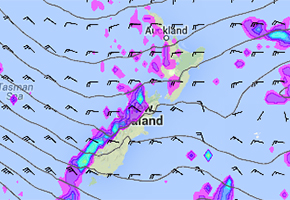 Expect a westerly airflow over the country tonight while an anticyclone sits to the North of New Zealand. Skies in eastern areas will be mainly clear while out west expect cloud and the odd shower, especially for the South Island’s West Coast.

Northland
Mainly clear with brisk westerlies easing this evening, there is the chance of some cloud and the odd light shower in the west overnight.
Tonight’s Low: 12

Auckland
Clear spells with strong westerlies easing this evening, there may be the odd shower about mainly in the west.
Tonight’s Low: 12

Bay Of Plenty, Waikato & Central North Island
Cloudy spells with westerly winds, the odd shower for most clearing this evening about the Bay Of Plenty however continuing overnight elsewhere but only infrequently.
Tonight’s Lows: 7-11