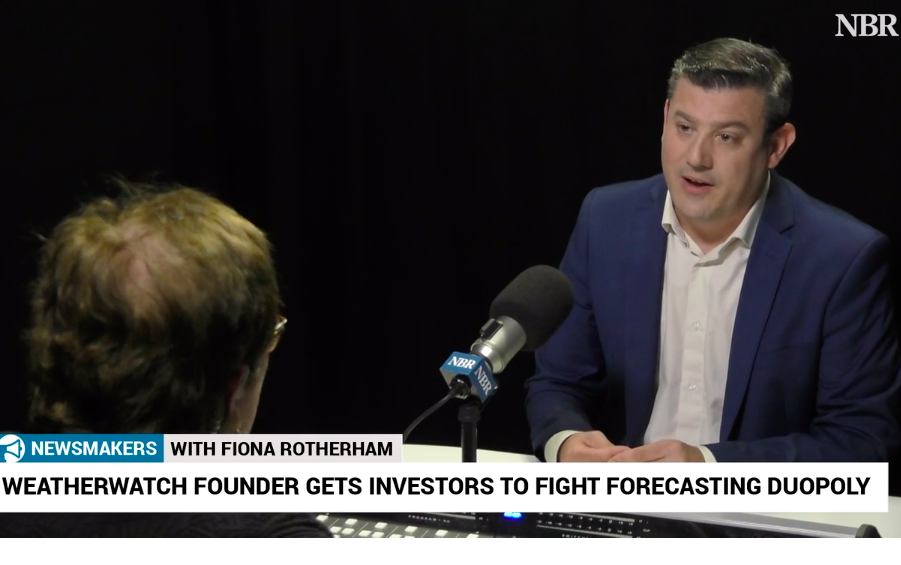 By Fiona Rotherham, NBR — Philip Duncanâ€™s big passion in life is, to quote a well-known Dave Dobbyn song, â€œbringing you the weather from the satellite jigsaw.â€

The 40-year-old former radio ad manâ€™s own outlook is sunnier due to an influx of new investment and partnerships with IBM and Amazon that will see him able to provide more accurate, detailed weather forecasts across New Zealand by setting up an alternative network.

Mr Duncan has sold half of WeatherWatch for about $500,000 to five new investors, including Vivian Morresey, former general manager of sales and marketing at Xero, who has taken on the role of chief operations officer, along with an 11% stake in the company. His brother, Shaun Morresey, has become the second-largest stakeholder with a 16% stake.

Mr Duncan has no formal qualifications in weather but heâ€™s always been fascinated by it, is a good communicator, and buys in the scientific information and computer modelling he needs.

He positively gushes when asked about his favourite weather event â€“ cyclones Fergus and Dreena, which hit in late 1996 and 1997, the summer he left high school, which led to him setting up a private weather station in his hometown of Te Aroha. As an aside, he says the eastern Waikato gets hit by cyclones with winds worse than anywhere else in New Zealand. Who knew?

Wellington-based Vivian Morresey is another weather nut, who set up wind.co.nz in the 1990s when he was really into windsurfing and didnâ€™t want to have to drive to the beach to find out which way the wind was blowing. While popular, the website never made much money and he moved on to bigger and better things with a number of tech startups including Xero and Green Button.

He runs another tech startup, PartTimer, which he co-founded in early 2016. PartTimer makes it easier for employers to hire part-time staff. 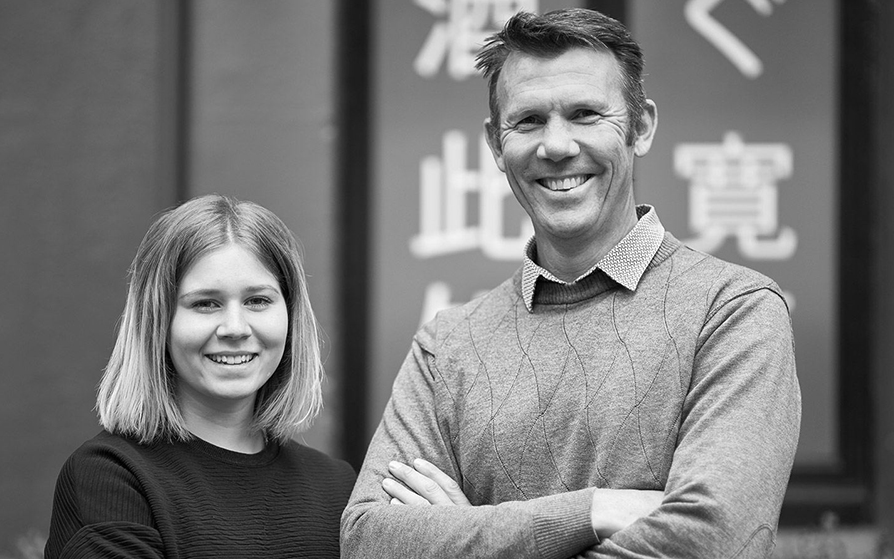 Mr Morresey says heâ€™s attracted to WeatherWatch because he thinks the timing is now right with advances in technology to â€œtake it to the next level.

â€œThatâ€™s something Iâ€™ve learnt with startups that timing is the thing. You can have a lot of money to make things happen but for the best effect you need to have the right timing,â€ he says.

The uphill battle and getting over it

Mr Duncan has muddled along with just one other staffer since he conceived the idea in 2005 after category five Hurricane Katrina caused enormous damage in the US.

He provided internal forecasts for his then employers, The Radio Network and Newstalk ZB, before taking over ownership in 2010. The company expanded into providing weather forecasts on the six biggest centres for private and public sector entities, in competition with the two government-owned forecasters, MetService (which provides weather forecasts out for 10 days) and Niwa (which focuses on climate change).

Mr Duncan has managed to survive and make a small profit but has been hampered by a lack of working capital to create new products and a lack of access to open data on weather from the duopoly government agencies.

NBR first reported on Mr Duncanâ€™s battle against the agencies in 2011 and then again in 2012 when MetService succumbed to public pressure to release rain radar imagery (the â€œholy grail of weatherâ€  in real-time and free to the public. The catch was it wouldnâ€™t do so for competitors, making them pay prohibitive fees.

An open access to weather data review by the Ministry for Business and PwC was completed in April last year but only released by the Labour government in October this year.  Research, Science and Innovation minister Megan Woods said the status quo would remain.  After a meeting with the minister, Mr Duncan says the outcome was â€œdisappointing, especially after the years of waiting.â€ A spokeperson for the minister’s office described the meeting as “positive”.

His frustration stems from the fact New Zealand is one of the few western countries to commercialise its weather information and heâ€™s still pursuing several complaints including accusations of anti-competitive behaviour against Niwa and MetService with the Commerce Commission.

The commission says the complaints were on hold pending the reviewâ€™ s outcome and itâ€™s now assessing whether to open an investigation or not.

But Mr Duncanâ€™s new investors told him to get over it and move on. Their money allows him to increase staff numbers to seven including hiring a chief technology officer. New partnerships with IBM and Amazon means it can provide more detailed forecasts on New Zealand from a range of forecasters globally and heâ€™s setting up an alternate network with the first rain radar due in Auckland early next year.

Mr Duncan likens it to the Telecom set up in the 1990s/early 2000s when it had monopoly ownership of the copper wire network which made it hard for competitors to enter the market. Telstra ended up installing its own cables and infrastructure to compete.

â€œWeâ€™re saying weâ€™ll build our own separate system, make a profit on it, and provide a service thatâ€™s missing,â€ he says.

Although thereâ€™s enough money in the pot for one rain radar, more investment would be needed to build out that infrastructure nationwide. Mr Morressey says the plan is to assess how well the service is monetised in Auckland before seeking more capital.

One point of difference for WeatherWatch will be providing people with an aggregate of forecasts from different providers globally and in New Zealand rather than just one, he says.

Mr Morresey was in the US last year when Hurricane Irma struck and watched as private forecasters provided four or five different paths on where it was heading. â€œIn New Zealand you just get the path,â€ he says, and it often turns out wrong.

The government forecasters will be able to be held more accountable, Mr Duncan says somewhat gleefully, but he insists itâ€™s not about beating up on them. â€œItâ€™s about finding another way to help lift the standards of weather forecasting in New Zealand.â€

Do people trust weather forecasts when theyâ€™re so often wrong?

Forecasters can get quite defensive about that question, he says, because there are a lot of variables.

The Open Access to Weather Data review, entitled Weather Permitting, aimed to find out if more government-held data should be more accessible to the public to encourage innovation in New Zealand. It also investigated whether MetService and Niwa were complying with the principles for making available non-personal data held by the government.

The review found that while most data reuse principles were being met by both agencies, access to observational weather data is more restricted in New Zealand than in other countries.

The current barriers are unsurprising, it says, given MetService as a state-owned enterprise and Niwa as a Crown research institute are tasked with offsetting some of their costs through a user-pays model for data.  Improving accessibility would mean changing the agenciesâ€™ funding models and central government would have to fund any shortfall. The cost of that legislative change would also run into the millions of dollars and it is not a priority for government.

The review concluded that, while there would be benefits for commercial users from making more data more freely available, the costs to taxpayers outweighed the public benefits. The government said legislative changes were â€œout of scopeâ€ of the review along with whether there was an overlap of forecasting services by the two agencies.

New Zealand had the most restrictive access compared to other western countries, with the US and Norway both at the other end with completely free access. While there are other players in the local market such as big overseas weather companies, without access to more detailed New Zealand weather data their products are of low resolution and detail, making the two government agencies the dominant players for weather services and data.

The review also said access to timely weather observation data in New Zealand is costly, with charges ranging from hundreds of thousands of dollars for some data and millions per year for the entire surface observation network. Both agencies also donâ€™t have standard or published prices, negotiating each agreement separately. It also said some people believed the agencies used their monopoly to stifle market competition.

For its part, the MetService says it welcomed the governmentâ€™s recent conclusion of the review and that â€œmost data reuse principles were being met.â€

However, it is making further changes to increase accessibility and reusability of observational weather data, including developing an API (application programming interface) that makes a wider range of data publicly available to support the development of innovative products. A revamped website being rolled out next year will also include self-service access to data paid for online.

MetService provides forecasts for up to 10 days as well as a seasonal outlook and is the official provider of the severe weather warning system for emergency services.

Niwa is more focused on climate change. It has just opened a new $23 million supercomputer facility that will help to advance weather forecasting, enable more precise forecasts, and refine forecasting of climate extremes and hazardous events.

– Fully published with permission from NBR

*Side note, 100% of the investment has been placed back into the company for future growth and public services – WeatherWatch.co.nz

We could surely do with more of it, as an antidote to rampant cronyism and protectionionism.
NZ is being stifled by them and I’m sure all us who use and enjoy Weatherwatch wish you the best, PD.
Have a great 2019.