Weather Video: Your Weekend forecast and outlook for next week 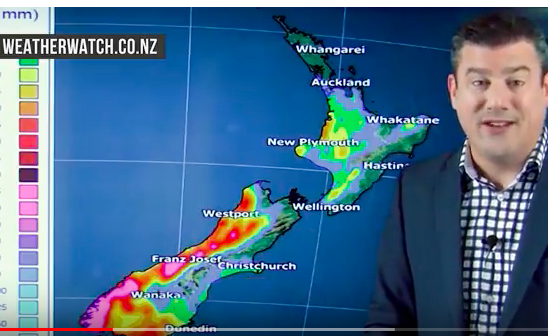 Windy westerly quarter winds are with New Zealand for the weekend but will be easing on Sunday after a bluster Saturday that may see gales in some places. Winds turn cooler souâ€™west this weekend as high pressure starts to push in on Sunday.

The high isnâ€™t perfect and while it will give dry weather to most regions – along with lighter winds – it wonâ€™t be solidly covering the country allowing a weak cold front up the South Island on Tuesday, for example.

The high should be covering much of New Zealand by Wednesday though.

Despite the high coming in some western areas may still be a bit cloudy with the odd light shower, something that can happen to large highs when weâ€™re not in summer and is known as â€œanti-cyclonic gloomâ€ (low cloud trapped under the high).