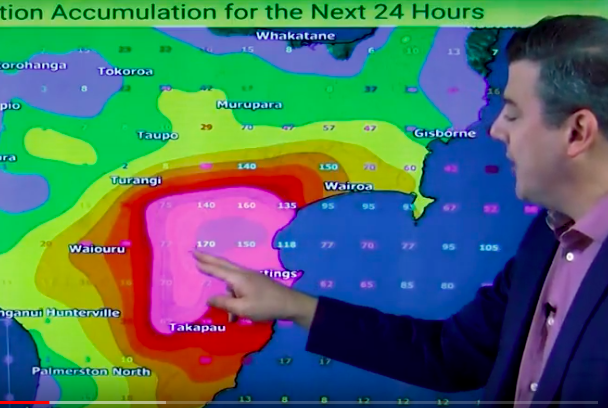 A prolonged period of south to south east winds will drive in rain with heavy falls to the eastern North Island over the next four days.

In particular Hawkeâ€™s Bay is at risk from flooding due to the narrow but stubborn area of rain which will keep coming in. Already some places as of Wednesday morning had received 75mm and counting.

But the set up means mostly dry weather elsewhere with a large high rolling in. We track the weather through until next Tuesday where we end on a sub-tropical low moving into northern NZ bringing, you guessed it, more rain.

Up until 8am this morning 6.Sept we have had 95mm of rain. Heavier rain is starting to fall again now 2.15pm and have another 4mm in the guage. Looking to the South it looks very bleak. Not a great start to the lambing in the area.
Regards