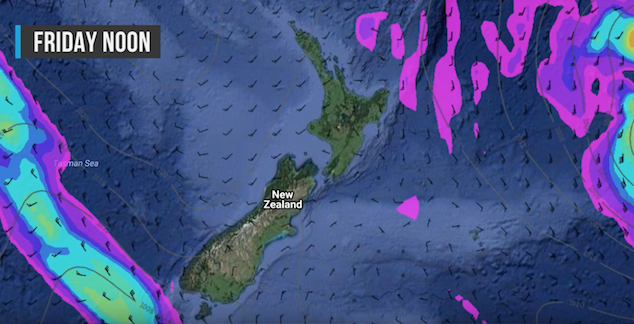 Today is looking mainly settled for most, but it must be said that mainly settled doesnâ€™t always mean mainly sunny. Some about the west of the North Island are probably having a fairly cloudy day today. A northwesterly airflow develops across the lower South Island ahead of a front which moves onto Southland later in the evening or overnight. This front continues northwards on Saturday reaching the lower North Island later in the evening.

Sunday sees a west to southwesterly airflow lie across the country bringing cloudy areas and the odd shower in the west while itâ€™s drier out east for the most part, just a shower or two possibly affecting Southland and Otago at times.

On Monday, the day off we all hope will be sunny; well for the upper North Island itâ€™s looking a bit wet unfortunately. Youâ€™ll be better off about the lower North Island. The West Coast of the South Island sees areas of rain with a chance of heavy falls meanwhile in the east a southwest change pushes northwards during the day bringing showers.