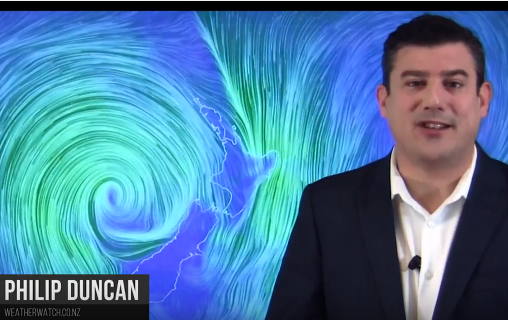 For Wednesday a large low in the Tasman Sea is crossing the country bringing wind and rain and, for the most part, mild conditions.

However on Thursday as this low departs east a new, colder, south west flow will spread up the country from Antarctica. Snow is likely to low levels in Otago and Southland from Thursday night and in some parts of Canterbury on Friday (mostly Banks Peninsula and the northern ranges). The south west flow may keep many other areas fairly dry in Canterbury.

By Saturday the cold blast will spread over the entirely country bringing cold weather and snow to Central Plateau – including possibly the Desert Road. It will also start to ease in some South Island areas.

Sunny weather will also be a theme for some regions as the colder change kicks in. The West Coast may be quite sunny this weekend as winds tilt more southerly making for cold and bleak conditions in southern and eastern areas instead.

A high spreads onto New Zealand during Sunday and Monday – then frosts may be the next issue.