Weather Video: A high is coming, but so too is another low 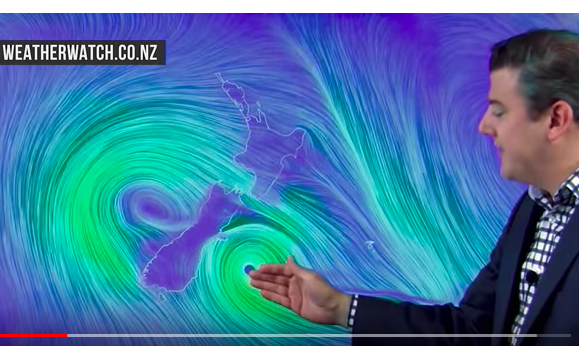 Gitaâ€™s remnants continue to affect the South Island for Wednesday with heavy downpours in the lower eastern side and the West Coast. There are now two lows around the South Island, the main one to the east will move away finally tonight.

The secondary low which formed when Gita hit the central part of New Zealand last night will move into the North Island on Wednesday night and Thursday bringing more downpours and showers – itâ€™s followed by a refreshing south to south west change.

By Friday and the weekend high pressure rolls in.

However a former Tropical Cyclone called Kelvin is currently dropping south through Australia (after making landfall in the north west the other day) and while it falls apart the leftovers of it will merge in the Southern Ocean on Sunday and Monday to form a new low over the South Island – with more heavy downpours. Itâ€™s not looking likely to be a storm but may produce some heavy rain with rain warnings possible.

NZH headline screams “Cyclone Kelvin heading towards NZ”. Sounds like a bit of an exaggeration to me based on your comments above. It isn’t even a cyclone anymore. NZH has major credibility issues with this sort of tabloid rubbish.

Totally agree with your comment. I saw the major headline on their webpage but the article did not mention much if anything about it..As I learnt sometime ago in situations such as this cyclone etc I never read what the press has to say.