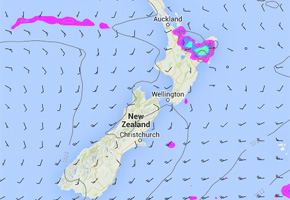 This coming week is looking mainly settled and dry, high pressure isnâ€™t dominating the situation maps for the coming days but neither are any decent lows either.

Monday sees a westerly quarter airflow lying over the
country, most regions in the west will see sunny areas and a few clouds about. Eastern regions from the Bay Of Plenty down through to Otago see light winds and afternoon sea breezes, the weather is mostly sunny too although some cloud will hang about coastal Otago and Canterbury. Just Fiordland sees a few spells of rain tomorrow as a weak front moves in, a few spots may drift into Central Otago. Highâ€™s for most are still warm up around the mid 20â€™s.

Tuesday sees westerly quarter winds in the west of the country, east to northeast winds in the east. Most areas see sunny areas and a few clouds about. Canterbury however has cloudy areas especially in the morning with the chance of a drizzle patch, Taranaki through to Kapiti also sees a fairly cloudy start with the odd sunny break from afternoon. The West Coast of the South Island may see a few morning showers then breaking to sunny areas. Late afternoon and evening an isolated shower or two is possible about inland parts of the upper South Island.

Wednesday has a weak low pressure system form over the eastern North Island while some ridging occurs further south. Southerlies pick up in the morning along the South Islandâ€™s east coast bringing cloud and the chance of a light shower, becoming drier into the afternoon. Sunny areas in the west with westerly winds. For the North Island expect light winds for most, sunny areas and some cloud. Isolated showers possible about the ranges of Bay Of Plenty, Gisborne and Hawkes Bay late afternoon / evening possibly heavy with a thunderstorm. Southerlies move into the Wairarapa late afternoon bringing cloud and a few showers.

Auckland and Northland meanwhile have southwesterly winds with sunny areas and some cloud. Highâ€™s in the mid 20â€™s for much of the North Island, upper South Island and Buller. Temperatures in the high teens for the east and south of the South Island.

The airflow starts to turn northeasterly over the country on Thursday, sunny areas and some cloud for much of the North Island. An isolated shower or two late afternoon / evening is possible for many about the upper North Island. Morning cloud breaks to sunny areas in the east of the South Island, afternoon easterly winds. Mostly sunny elsewhere in the south although there is the slight chance of a shower or two about the ranges late afternoon / evening along the middle of the South Island.

Finally on Friday we can expect a northwesterly airflow to develop, warm on the South Islands east coast with mostly sunny weather, some cloud developing out west. For the North Island itâ€™s fairly settled under a ridge of high pressure, winds mostly light with afternoon sea breezes. Late afternoon / evening an isolated shower or two is possible for the Waikato through to Taranaki.