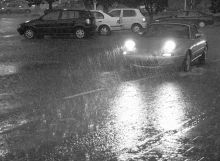 Heavy rain is pushing down the east coast of the North Island but conditions are improving behind it with rain easing and sunny spells expected to move in during the afternoon.

The developing low brought heavy rain to Auckland but the narrow and precise nature of the rain band appeared to make a tough call for MetService with rain warnings.  Auckland had a rain warning issued early on Monday morning only to be cancelled by 11am.  Another warning was re-issued on Monday evening.

WeatherWatch.co.nz says it’s often the case with lows that come in from this angle, with the rain band being close enough to touch sometimes but not over land meaning occasionally forecasters have to constantly re-evaluate the situation.

Strong winds and heavy rain affected the city last night leading to a flurry of comments on our website and our social networking sites as people celebrated the first ‘set in’ heavy rain in weeks.

The rest of this week sees a large high moving in from the Tasman Sea which should bring sunny weather to western and northern parts of New Zealand today and tomorrow and eventually southern and eastern areas along the Pacific Ocean during tomorrow and Thursday.

But more rain is on the way with a low expected to push across the South Island this Friday bringing a period of rain and wind right across the country.   We’ll have more details on this next low tomorrow.

How much rain fell at your place overnight?  Did you receive any flooding or wind damage?  Post a comment below and let us know

Auckland Airport only recorded 7.6 mm on Monday.
Have they got a leaky gauge?
It rained heavily for at least 5 hours where I live in Auckland!

Around 33mm here in Kaukapakapa not that much as previous lows but still enough to flood the kaukapakapa river!

Only 8mm fell in Kaitaia yesterday, never really looked like it was going to pour down although could see it over the eastern hills.

Being on the slopes of Mt Te Aroha, no flooding but lots of rain and Te Aroha wind. And shredded leaves plastering the front of my house!!!

41mm of rain overnight in Howick, pretty minor compared to the last event around 4-5th March.

Seemed a normal amount fell but far worse is the leaves and pine needles,like a war zone.