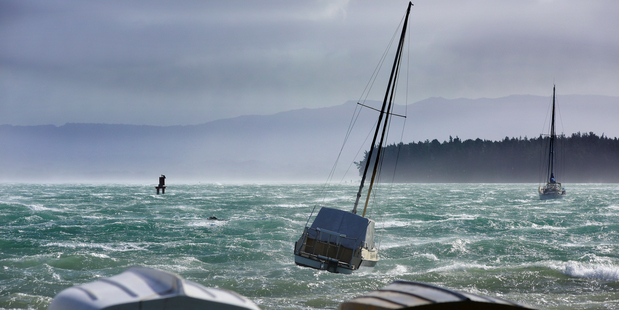 A boat holding 400 litres of diesel has sunk at Pilot Bay.

A mast remains sticking out of the water in Pilot Bay this morning, marking where the yacht has sunk.

Bay of Plenty Regional Council deputy harbour master Chris Isherwood said the boat was believed to be the 15 tonne ferro cement Nikita, and they were contacting the owner.

While the boat held 400 litres of diesel, none appears to have escaped into the harbour.

Two were blown ashore at Pilot Bay yesterday. Conditions were too rough to move the boats off the beach last night so they had been secured until high tide this evening.

A 9m blue-and-white launch known as Eagle which had been anchored in Pilot Bay, and the 11m yacht Te Hani which had broken its mooring, appeared to have escaped any major damage, but haven’t yet been moved.

An older wooden boat, Sea Gypsy, broke its moorings in Waikareao Estuary and was reported ashore at Chapel St. The owner is checking the vessel this morning.

Another boatie had to be rescued by the Coastguard last night when his dinghy was flipped by the wind while he was on his boat checking the mooring.

Mr Isherwood said it was important that boat owners checked their moorings today and ensured their boats were secure after yesterday’s battering.

“We’ve had a record four boats in trouble this time, but owners need to ensure their boats are secure today now that conditions have eased,” he said.

“Responsible boat owners need to take all precautions in keeping their vessel safe, if they know about impending severe weather, even if it means moving it to a sheltered marina.”