Weather mixed this week – new years eve not the best 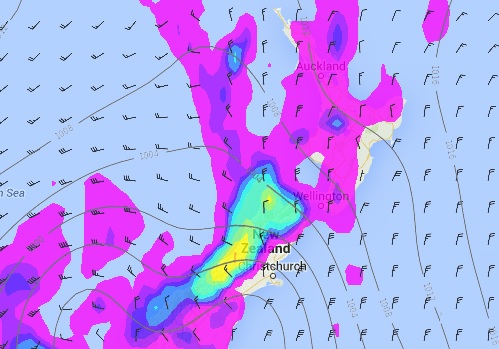 This coming week is looking a bit more mixed up than we have been having recently, and unfortunately new years eve isnâ€™t looking the best weather wise.

On Monday the country sits under a gentle north to northeasterly airflow.
The North Island has sunny areas and some cloud, afternoon sea breezes for most.
In the afternoon and evening isolated showers develop about many inland areas Waikato southwards – however some of these could become heavy with thunderstorms, especially south of Lake Taupo.

For the South Island expect northeasterly winds for most, breezy along the east coast in the afternoon.
Sunny spells and some cloud, and isolated showers will develop about the upper South Island in the afternoon and evening – possibly becoming heavy with the chance of a thunderstorm.
Showers will be mainly inland.
Southland and Central Otago has the best weather, with light winds and hot temperatures.

Tuesday sees a northwesterly airflow increase over the South Island, and cloud increasing in the west – with showers moving in later in the day, and high cloud moving in for the east.
The North Island sees sunny areas and increasing cloud with northerly winds, and there could be a brief light shower or two in some western areas, otherwise mainly dry conditions prevail.

New Years Eve, not the best at this stage.
A front moves north over the country during the day, strong northwesterlies precede the front with winds tending more moderate westerly behind.
Suffice to say it will be warm out east with high cloud, while central parts of the country are likely to experience strong gusty northwesterlies.
Gales are possible especially from Canterbury right through to the lower North Island.

Out west it is looking cloudy, with heavy rain for the South Islandâ€™s West Coast, while the west of the North Island mainly sees just patchy falls of rain from around midday.
The front doesnâ€™t move through till overnight for the North Island however, and by then the front weakens a fair amount – meaning a continuation of patchy falls is likely.