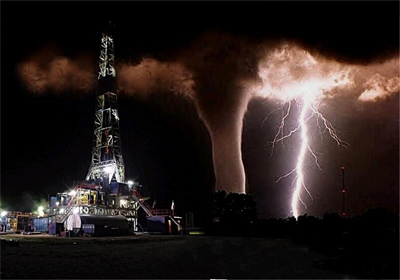 We’ve all had them – those emails that contain “amazing” photos of tornadoes, thunderstorms, lightning and hurricanes.

A few times I’ve had the Herald checking photos with me to see if they’re legit or fakes.  Sometimes it’s hard to tell… but more often than not the fakes are clearly that.  Even more obvious are the ones that claim to be of a “hurricane” when it’s obviously just a thunderstorm.

Our partners at Weather.com decided to investigate some of the more well known weather hoaxes – you’ve probably seen these photos yourself.

Stu Ostro, Senior Meteorologist
Every few months (and at times more frequently than that) I’ll get an email from someone who is excited or wary (or both) about a wild-looking weather photo they just received via email from a friend or relative of theirs.

Almost invariably I’ll have to tell them there’s something bogus about it: either the photo has been doctored or it’s legit but falsely attributed to a given place/time.

We’ve been discussing this topic recently at The Weather Channel (and last evening Jim Cantore and Dr. Greg Forbes did a segment on it) after reading of recent very serious hoaxes in which a TV station and a National Weather Service office were apparently intentionally misled during storm situations, the former involving a photo.

Fortunately, most of the time these sorts of photographs which are phony (elements of the photos themselves or the attribution given to them) are only circulated well after the fact so there’s not a public safety issue involved, but it’s still frustrating.

Here are a few of the most notorious cases.

The gift that keeps on giving. I seem to remember first seeing this and other similar photos being attributed to a supercell thunderstorm in Brazil. As the snopes.com analysis states, they’ve also been alleged to have been taken in Australia, Alberta, and Ontario in 2005. But most often and famously, they’re said to have been associated with the eye of Hurricane Katrina! As Bart Simpson would say, aye (sp?) carumba!

The photos are totally real, but were actually taken by storm chaser Mike Hollingshead on the Great Plains prior to 2005. In particular, this pic is of a supercell near Alvo, Nebraska on June 13, 2004.

A photo of a waterspout in late June 2001 which was originally legit and published in an issue of “Anchor Lines” newsletter was then doctored to show three waterspouts next to each other and said to be produced by Hurricane Lili in October 2002!

I still have the emails I received on October 2 and 4 of that year, respectively, one from a meteorologist at TWC who had seen the photo via an online storm chaser listserv and the other which was sent to a tropical cyclone listserv I’m on. An hour after the first email, a message came from the sender with the subject line of “Upon further review….a fake?” And three hours after the other came a follow-up saying, “I apologize for sending the group a fake photo.”

The tornado and lightning bolt are real. That’s a famous photo taken near Lake Okeechobee, Florida on June 15, 1991 by Fred Smith. However, it then circulated with the erroneous attribution of having been taken in Missouri on March 12, 2006. And apparently that wasn’t juicy enough, so a drilling rig was added in along with the claim of Fort Stockton, Texas being the location.

The atmosphere creates plenty of spectacular images on its own, many of which TWC receives thanks to all of its Weather Warriors, without need for embellishments! However, this Internet age also lends itself to shams such as the ones highlighted here. Sooo … look with a cautious eye the next time you receive an email from someone saying “Hey! Look at this amazing weather photo!”

Anyone remember the one of the tornado and the wind wand in New Plymouth a few years back that got on the news?

We actually have it in our gallery… if you search under twister or new plymouth tornado you’ll find it!