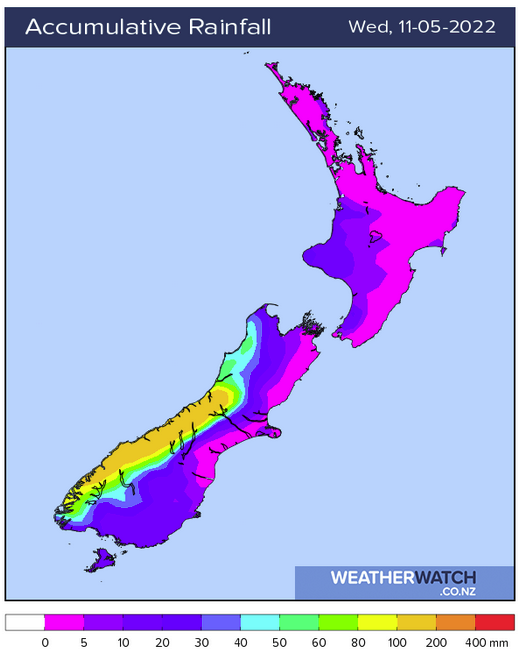 The weather over the next few days and into next week is sticking to the game plan with what the models have foretold. Today and tomorrow is basically mainly settled thanks to high pressure, Sunday a front moves over the South Island bringing heavy rain in the west while it remains settled further north. The front moves over the North Island on Monday bringing some rain in the west then eventually the airflow tends to the southwest with showers pushing up the east coast of the South Island.

The map below shows the accumulative rainfall from today through to Wednesday next week. As we can see the West Coast gets the bulk of the rain from Sunday’s front.

WARM FOR THE EASTERN SOUTH ISLAND ON SATURDAY

A northerly airflow lies over the South Island on Saturday, therefore warm temperatures can be expected in the east. There is a chance if you are more on the coastal fringe highs may be a little cooler than just inland a bit thanks to winds tending more northeasterly there. Christchurch for example may not escape the high teens where as Ashburton will likely reach 21 or 22 degrees.

Most of the North Island has a warm day too with temperatures in the late teens or early twenties. likely.

HEAVY RAIN FOR THE WEST COAST ON SUNDAY

The main feature coming up is a front moving over the South Island on Sunday, heavy rain can be expected for the West Coast. 150 to 200mm could fall about the western side of the Main Divide for South Westland with up to 100mm possible closer to the western coastal fringe. As the front moves further north into North Westland and Buller later in the day the rain may still be heavy for a time but the amounts do go down. Reefton for example sees 30 to 50mm.