Home > News > Weather for the second half of the week...

Weather for the second half of the week 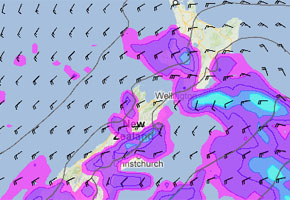 The weather coming up for the second half of this week will be spring like in nature with west to southwest airflows. Hawkes Bay and Gisborne are looking to remain fairly dry unfortunately. Other eastern areas will catch some rain or showers as a few southwest changes make their way north over the country.

On Wednesday the odd shower will pepper the west of the North Island especially in the morning, expect cloudy areas and some sun at times otherwise. Out east Hawkes Bay and Gisborne look to have more sunny weather, Wairarapa may just catch a few showers.

In the South Island conditions are looking rather pleasant although later in the afternoon south of Banks Peninsula through to coastal Otago a few thunderstorms may pop up due to surface wind convergence and advancing cold upper air.

Thursday is quite showery across much of the country, the front that moved onto the lower South Island overnight on Wednesday quickly pushes up and onto the North Island during the day bringing showers and a west to southwest change.

A trough will re invigorate showers moving over Canterbury so a few could be heavy in the afternoon then easing at night. The Amuri Plains may even see afternoon thunderstorms. Southland and Otago are likely to see showers for much of the day with cool southwesterlies.

Hawkes Bay and Gisborne may just miss out once again with this front as the isobars crank the airflow around to the right about the upper North Island.

Friday see a westerly airflow  over much of New Zealand easing across the upper North Island during the day. Most places look to be dry however a front approaching the far south later in the day will start to spread showers up the West Coast of the South Island.

Lousy summer in Auckland…5 warm days back to southwesterlies.bring on winter lol

Nothing pleases me more then to bring you more SW winds Michael, lol 😀