Home > News > Weather for the final week of January...

Weather for the final week of January 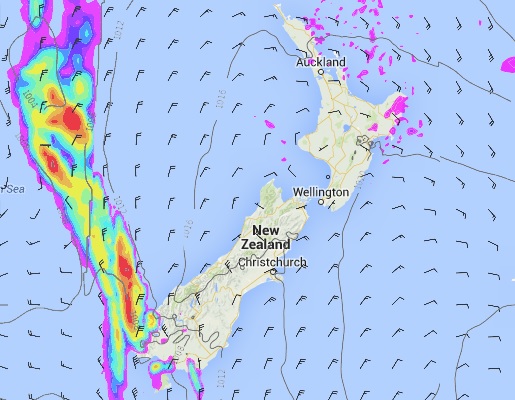 The final week of January doesnâ€™t offer much relief from the dry weather weâ€™re having going by current indications, anticyclonic conditions will dominate mostly although a weak low floats around north of the North Island for a time and a slow moving front skirts the far south of the country.

On Monday a ridge covers the North Island bringing
you guessed it, settled and mostly sunny weather. East to northeast winds pick up a little along the east coast in the afternoon and northerlies may pick up a little about Wellington in the afternoon also. Cloud caught up in this easterly airflow may deliver a light shower or two to Gisborne, Great Barrier Island and eastern parts of Northland during the day.

For the South Island expect a northwesterly airflow for most however right on the east coast winds will be breezy from the east or northeast. Many parts of Canterbury especially inland can expect a scorching day with highâ€™s in the low possibly even mid 30â€™s. The weather is looking mostly sunny with any morning cloud in the east burning away, expect some high cloud for the lower half of the South Island. Southland and South Otago may experience a shower or two in the afternoon and evening, Fiordland sees some rain from afternoon.

Tuesday sees a southeasterly airflow for the North Island, the west can expect a mostly sunny day. A shower or two is possible in the afternoon about the Waikato and Auckland however due to some instability, and the East Coast will experience a mostly cloudy day with a shower or two at times for Hawkes Bay and Gisborne.

For the South Island most will have settled weather however a slow moving front brings fairly cloudy skies for Southland and Otago, some of that cloud may creep up into Canterbury. Fiordland experiences the odd shower, Southland and Otago may see a spit or two.

Come mid week a low north of the North Island brings an east to southeasterly airflow. There could be a few isolated showers in the afternoon / evening for some interior parts of the North Island. The east coast sees a period of morning showers which clear, sunny spells for the afternoon. Other then that elsewhere looks fairly good.

Over the South Island expect cloudy areas in the east with light winds, all mainly onshore. There could be a light shower or two about, mainly later in the day. For inland parts of the upper South Island an isolated shower or two may form. The only sure precipitation looks to be the remnants of a front bringing some rain to Fiordland.

Thursday sees the low to the north of the country weaken, gentle easterly quarter winds for the North Island with mostly sunny weather. Chance of a shower late afternoon / evening for some interior regions and perhaps Northland, this chance does appear to be only very small. The South Island is fairly cloudy in the east, a few drizzle patches about but many dry areas too. The West Coast looks sunnier with light winds, perhaps an isolated shower about a few inland ranges late afternoon / evening.

Finally the end of the week has an easterly quarter airflow over the country, cloudy for many in the east with the odd light shower about especially the South Islandâ€™s east coast. Sunnier out west for many with a few isolated showers possible late afternoon / evening.

Hi weatherwatch. Lately your Hawkes bay and Gisborne forecasts have not been as accurate as it used to be, and the last week of January looks as though it will follow the inaccurate theme. Your forecast of; Shower or two on Wednesday AM then fine doesn’t match up with model data. I am following Metservice at the moment and I expect rain from Tuesday evening through to Early Thursday, throughout that time there maybe a few locally heavy falls about the Coastal hills of Gisborne.
Sorry about the Negativity thought id just let ya know what’s going on and maybe you could improve. Thanks.

ms tends to over do the rain predictions this time of year. Wait and see what happens. For auckland they have rain for 7 days after Tuesday. Won’t happen