Home > News > Weather for Friday and Saturday plus pot...

Weather for Friday and Saturday plus potential threats 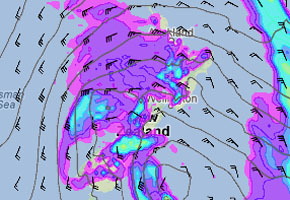 A deep low pressure system off the east coast of the South Island controls our weather today, it will move away further to the east overnight and during Saturday with conditions easing over New Zealand.

Potential weather threats to look out for today are firstly strong winds then secondly heavy rainfall with a risk of hail.

Strong to gale force south to southwesterly winds may also occur along the coast from Otago through to Canterbury from morning then easing in the evening.

There is the potential for some heavy rain as a southerly change moves up the east coast of the South Island which could cause some minor surface flooding, mainly South Canterbury at first in the morning and spreading into Mid Canterbury mid morning then North Canterbury for a time in the afternoon. Heavy rain is not likely to get any further north then about Waipara in North Canterbury.

A thunderstorm threat exists again however this time for between Kapiti and southern Waikato just after midday and through the afternoon, short sharp heavy falls are likely to occur with hail in storms and there is the potential for strong wind gusts when storm cells pass over. There is the low risk of a tornado about Taranaki also.

Conditions ease overnight and Saturday has no weather threats to mention, perhaps there may be a few late afternoon / evening showers about eastern Bay Of Plenty due to converging winds in the area which could produce a brief heavy shower. Showers in the west of the North Island ease during the day to clear by evening, southwesterlies gradually fade out later in the day.

In the South Island on Saturday southerly winds ease during the day also with skies brightening up for most, there is the chance of a few brief afternoon showers about Southland and Otago as a weak front brushes past the area.

Hi my daughters school sports events just got cancelled midway through and we were all sent home due to an incoming storm. Is this correct and do we need to prepare for anything? We are in Wanganui

Looks like an afternoon of passing heavy showers with a chance of hail and gusty westerlies currently reaching 45km/h for yourself in Wanganui.

Could be a few thunderstorms in the mix with this lot too.

Prepare for an afternoon of movie watching indoors 🙂 If your concerened about any tornado risks then I wouldn’t be too worried as chances would be very very slim for something to affect yourself, although there is a tiny chance due to potential thunderstorms in the area today it is not looking likely.

What about the West Coast of the South Island?? We didn’t even get a mention today. We are still here you know.

We mention the West Coast all the time! B ut just not in this specific story, as most of the rough weather is in the North Island and eastern South Island 🙂

You have a few showers today – actually quite a few in the north!  But conditions ease over the weekend – but still a low risk of showers and coastal clouds early next week, otherwise settled.