Home > News > Weather feeding in from the Tasman...

Weather feeding in from the Tasman 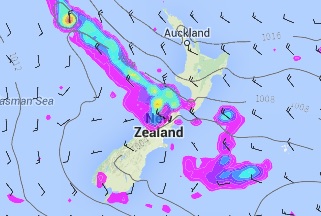 This coming week has fair bit of weather feeding in from the Tasman Sea. It isnâ€™t looking all that settled but the weather pattern will be somewhat different to what is has been for the previous month or two.

On Monday an anticyclone is mainly in control bringing settled conditions. For the North Island most regions could see and early shower then clearing to sunny spells and light winds, afternoon sea breezes in coastal areas. The east coast of both islands sees easterly winds build from morning. Periods of cloud for the South Islands West Coast with northerly winds, chance of a light shower more so evening onwards.

Tuesday sees a northwesterly airflow increase, rain for the South Islandâ€™s West Coast spreads northwards during the day. High cloud out east with the odd spot of rain possible Banks Peninsula southwards in the east at some point. West to northwest winds build over the North Island, periods of cloud in the west with the chance of a brief afternoon shower about the Central North Island northwards. Dry, sunny and warm on the east coast.

Northwesterlies lie over the North Island on Wednesday and southerly winds move into the far south. Increasing cloud for the North Island with spells of rain moving into Taranaki southwards in the evening. Rain clears from the south on the West Coast of the South Island bringing in sunnier weather, a few showers pepper Southland and Otago from afternoon, drier further north although cloud closes in.

Rain or showers affects most North Island regions on Thursday, possibly becoming heavy in some western areas later in the day. The east coast and Wellington only sees spots of rain at times and high cloud. For the South Island expect showers about Southland and Otago, sunny spells further north with only afternoon showers possible. Mainly dry on the West Coast.