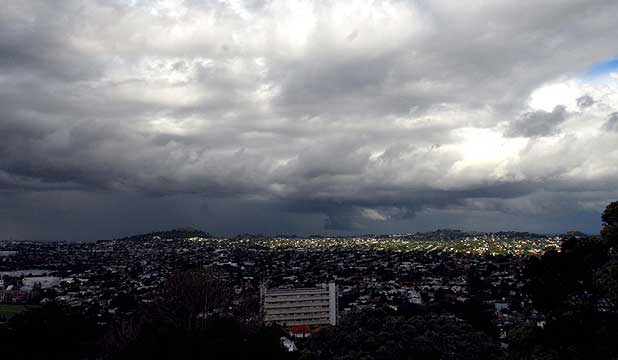 With parts of the Auckland region being spared from the weather bomb over the last 18 hours, during late July back in 2008 Aucklanders certainly copped it a little more.

Here is a bit of a breakdown on what occurred nearly 4 years ago.

Heavy rain began falling in Auckland by mid-morning.The city had already had rain every weekend in July washed out and cancelling hundreds of rugby, soccer and hockey games. The weekend of the weather bomb saw the Auckland Hockey Association cancel games for the first time in five years.

High winds caused a number of faults to power cables and brought down power lines in Auckland, cutting power to 60,000 customers. 53,000 homes in Rodney, Waitakere and the North Shore were without power and there were 7000 without power in Howick, Otara, Clevedon, Mangere and parts of Waiheke Island.
More than 35 vessels broke their moorings off Auckland. Debris, including roofing iron, roadwork barriers and road signs, fallen trees and power lines were blown on to roads.
Winds in Auckland peaked at 4 in the afternoon, with recorded average speeds of 96km/h, gusting to 130km/h.

On the North Shore, a number of hot water pilot lines were extensively damaged by the storm. Affected areas included Narrowneck, Devonport to Hauraki Corner, and parts of Puhoi and Coatesville.
About 1500 customers on the Vector network were without hot water. Dozens of residents were still without hot water a week after the severe weather damaged power supplies. Vector estimated 40 to 50 homes were still without their supply.

The SkyTower was closed mid afternoon because the spire was swaying too much. About 500 people had restaurant reservations cancelled.

The speed limit on the Auckland Harbour Bridge was reduced to 60 km/hr and motorcycles were banned due to high winds. Lanes onto the bridge were also closed by whipped up waves.
Gusts on the bridge were clocked at up to 135 km/hr and were “pushing” cars around.The cut off point for closing the harbour bridge entirely is 150 km/hr.

I remember it well, it was our wedding day

Not much fun on your big day.We hope it was calmer for you during the honeymoon!

This photo was taken during the 2008 weather bomb and clearly shows the power of the wind:
http://mandenomoments.com/foul-weather/e21a751c
(note the link to a description of the conditions)

Today (3 March 2012) I was on Karekare (a west coast beach in Auckland) at noon, around the peak of the onshore wind. Looking at the Beaufort Scale I would say that the winds were at the upper end of Gale (72kph), possibly more. Chunks of foam were blowing across the beach and communication at distances over six feet was effectively impossible. One gust more or less knocked me flat while I was kneeling and taking photos. By far the most practical response to the rain squalls was to stand with one’s back to the wind and wait it out.

I thought that storm was in School holidays July 2007?
I remember that storm well, as we had only just moved into a house on Pakiri Ridge, which is very exposed. The winds came from the east, directly on to the end of the house. By 2 o’clock the picture on the lounge wall was banging so hard (through movement of the wall) that I had to take it down so it didn’t break the glass. Myself and the kids took refuge at the back of the house as, if the wall had come down the vaulted roof would have collasped. We huddled in the ensuite with blankets and a mattress, terrified, as we listened to the deck roof being ripped off. My husband ,who had been working, spent ages trying to get home in the dark with trees down everywhere. Eventually, abandoning his car and walking the rest of the way, climbing under 3 large downed pine trees with other trees creaking ang groaning around him. The scariest thing he said he has ever done.

This one came down from the north to lie east of Auckland I can remember and deepened in the process.