‘We are in historic times’ – Epic flood hits USA 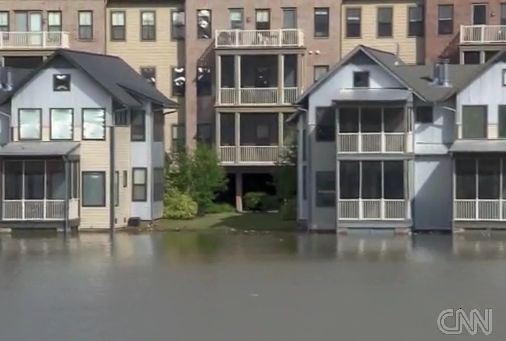 Bright skies over Memphis, Tennessee, belied a potential disaster Monday NZT as a surge of fast-moving water threatened the city and many other communities along the Mississippi River.

Days earlier, the crisis centered on Cairo, Illinois, as historically high water levels in the Mississippi and Ohio river systems prompted the Army Corps of Engineers to intentionally blow up levees and flood 130,000 acres in Missouri. Now “the most high risk population” is in Memphis, according to Corps of Engineers Col. Vernie Reichling, though the worst danger zone is expected to move further south in the days to come.

“This water that we’re seeing coming by is moving 2 million cubic feet per second,” said Reichling of the situation on Sunday outside Memphis. “To use an analogy, in one second that water would fill up a football field 44 feet (13 metres) deep.”

Despite a lack of new rain, the water levels rose further around Memphis to 15 metres yesterday afternoon NZT, according to National Weather Service spokesman Richard Okulski. On Tuesday morning, authorities expect it to finally crest outside the western Tennessee city at 48 feet (15 metres) — just short of the 48.7-feet (20cms higher) record set in 1937, when Reichling said more than 500 people died and 20 million acres flooded.

“It’s a very powerful river. It looks like it’s running very slowly, but it has a very strong current,” said Bob Nations, director of preparedness in Shelby County, Tennessee. “We still don’t know (exactly what) the river might do.

The crisis stems in large part from a deluge of rainfall over the past month further up the Mississippi River. Reichling said that, over one two-week stretch, there was about 600% more precipitation than usual. This contributed to a bulge, or crest, of especially high fast-moving water that has made its way downriver.

The deluge has put tremendous pressure on the levees and other systems that aim to keep the river system in check.

Reichling noted that a major problem — and the cause of much of the flooding seen Sunday in Memphis and beyond — is that such tributaries as the Wolf River are overflowing because there’s not enough room in the Mississippi for them to filter into.

Still, while heavy rains may have contributed to the problem originally, authorities said that the weather now appears to be working in their favor. Only minimal rain is expected over the coming days, with daytime temperatures forecast to be in the late 20s and early 30s C through Thursday, at which point the water levels should begin to creep back down.

“You feel that it’s hot and humid outside, it feels like summer? That’s a good thing,” Okulski said.

As to efforts to miminize damage to property and people around Memphis, authorities said there have been no big surprises so far.

The Corps’ 150 inspectors haven’t found any sign of trouble beyond expected “under-seepage” of water in some levees and minor overtopping near the White River, according to Reichling. And while one person has been arrested for allegedly trying to steal from an evacuated residence, Nations said that good cooperation with citizens and good teamwork among various government agencies has made for few headaches.

But that’s not to say the high water levels haven’t already inflicted significant damage and upended lives. Nicholas Pegues, an East Memphis resident who lives near the Wolf River, said he’s seen extensive flooding and homes left uninhabitable by the waters as he’s traveled through the region.

“It’s affecting daily life tremendously,” said Pegues, a Shelby County elections’ division employee who submitted photos of the flooding to CNN iReport. “It is pretty severe downtown… I know a lot of … people have lost their homes.”

Already, residents in at least 1,100 trailers and and homes in low-lying areas in the county, which includes Memphis and surrounding areas, have been told to evacuate. In addition to about 400 residents in shelters, scores of animals have also been taken in, according to Shelby County officials.

On Sunday, officials were going door-to-door to personally alert 243 residents to follow news developments and prepare for possible evacuations. The flooding already has crippled parts of Memphis, prompting several festivals and other events to move, Pegues said. But he said there’s been an upside, as many residents have rallied to help one another.

Even if the water levels max out as expected on Tuesday, National Weather Service meteorologist Bill Borghoff said it is possible the river won’t fall below flood stage until June around Memphis.

Meanwhile, the main crisis point is expected to migrate further south along the Mississippi — with Mississippi and Louisiana next under the gun.

The Army Corps of Engineers has said it will consider opening a spillway 45 kms upstream from New Orleans to reduce the volume and velocity of the Mississippi River as the water races south to the sea.

The spillway can accommodate about 7 million litres of water per second, diverting it to the Gulf of Mexico by way of Lake Pontchartrain, and sparing the low-lying city of New Orleans from high waters. The spillway is scheduled to open Monday, the Corps said.

Currently, Reichling said he was confident that all systems were working as planned and, “today, we’ve managed to contain the wicked river.”

But he warned that the crisis is far from over, as engineers, municipal authorities and citizens all along the Mississippi and its tributaries engage in a “floodfight” to protect themselves and their property.

“We are in historic times,” Reichling said.