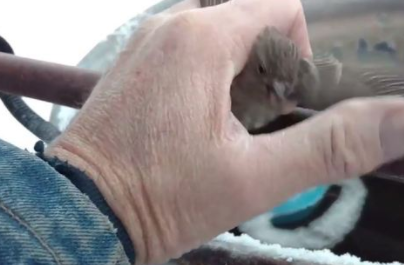 A sparrow that found itself stuck in a spot of trouble has become the star of a YouTube video thanks to an Idaho man who rescued the little bird after it was discovered frozen to a metal pole.

Nelson Wilson was feeding horses on New Year’s Day when he spotted the bird struggling to take off from a fence near a heated water tank.

Commenting on his YouTube post, Wilson wrote: “It is not uncommon for birds to drink from the heated tank. Apparently this unfortunate bird had gotten its feet wet and, while making its exit, had become frozen to the fence in the prevailing near zero Idaho temperatures.”

Initially Wilson tried to free the sparrow with the warmth of his hand, gently holding the bird and pressing his palm against its feet and the metal pole.

When that proved futile, Wilson resorts to breathing on the bird’s feet.

“It then seemed that warming the bird’s feet with my warm breath would bring quicker success,” he wrote of the footage that shows the bird being loosened from the clutches of the ice.

As it flutters away, Wilson can be heard saying: “Here we go little birdie. You go ahead and fly away.”