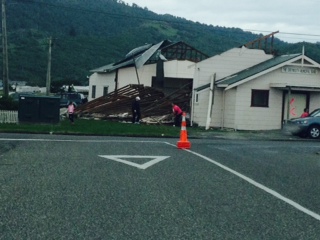 People around Christchurch are being advised to watch out for potholes, debris and surface water following yesterday’s extreme weather.

The man road to Akaroa from Little River also remains impassable due to slips.

The Christchurch City Council said this morning workers were out across the city managing the effects of the storm.

“People travelling are asked to take extra care and be vigilant for debris and potholes that may have been caused by rain and surface water.”

Those in hillside areas should look out for signs of land instability, including cracking to land, buildings, driveways and paths and rockfalls, it said.

While the water supply has been restored to Lyttelton following a burst water pipe supplying the Quarry Reservoir, Banks Peninsula residents have been asked to conserve water as the storm could have effected water quality in local streams.

Residents should also avoid coming into contact with flood water, as it could be contaminated, the council said.

In Otago, welfare centres were set up last night in four North Otago towns along State Highway 1 to provide accommodation and food for motorists trapped by flood waters.

Long queues of traffic built up either side of Maheno when the Kakanui River burst its banks yesterday afternoon, forcing authorities to close SH1 at Maheno.

Waitaki District Council emergency services manager Chris Raine said four welfare centres accommodating up to 400 people, were established last night when it became clear there would be no way through for vehicles over night.

The centres were at the Palmerston Child Care Centre, Hampden Hall, Maheno Hall, and at St Kevin’s College, Waitaki Boys’ High School and Waitaki Girls’ High School, in Oamaru, which have boarding accommodation and kitchens.

Southern District Command Centre deployment co-ordinator Senior Sergeant Brian Benn, of Dunedin, said traffic was initially diverted along the coast road, but one of the bridges at Kakanui was a single lane bridge and there were concerns about its structural stability. So it too was closed.

“It’s been very frustrating for people travelling north and south of Oamaru.

“There’s some big queues there. I’m sure that’s frustrated quite a few people.”

The heavy rain, which got Easter off to a sodden start, is expected to ease today, but Otago Regional Council (ORC) flood managers say the worst may be yet to come.

The deep low from ex-Cyclone Ita, which sat west of New Zealand yesterday, is expected to weaken and move across the lower South Island tonight.

The MetService lifted its severe weather warnings for Dunedin and North Otago at 5.30pm yesterday, but ORC flood managers have advised many Otago rivers remain high, and are likely to stay high for the next few days.