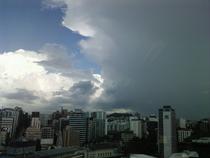 This past week has been an envious experience for me. I have been forced to endure other people’s joy as lightning and thunder flashes and crashes above their homes.

Meanwhile my own home in West Auckland saw nothing. Nought. Zilch. Zero. It’s been blue skies and sunshine. And it’s made me grumpy!…

I love a good storm. The moment I get a whiff of that ionized air my blood starts to rush. I feel as energetic as the Energizer Bunny. The world feels like a magic place to live in.

Then when the storm starts, when lightning flickers across the sky, when thunder rattles my house, I can only sit and stare in wonder. The raw power of an electrical storm gives me a thrill unlike anything else in this world. No roller coaster ride or date with Keanu Reeves could compare.

But this week has been most unthrilling.

Because this week while the Waikato and South Auckland have been blessed with sensational storms, storms I can only dream of, I was forced to sit in my sundrenched home watching the lightning tracker light up like an overly decorated Christmas tree. Envy flooded through me unlike any envy I have felt before.

I got a brief thrill on Thursday when a Severe Warning was issued for Auckland . I abandoned my work, ran outside and waited. And waited. And nothing happened. Apparently there was activity in West Auckland, but that was of no use to me when I was stuck in the city. Sigh.

Even worse was that an hour later I went home to West Auckland and by that time it was sunny again! I’m starting to think Mother Nature is playing with me.

So does anyone else feel all grumpy and envious that they missed such huge storms this week? Or am I alone in this?

As an aside, I was taught that envy is a bad thing, but I found this saying and I like it.

“Envy is the art of counting the other fellow’s blessings instead of your own.”  ~Harold Coffin

I think everyone in my house is over hearing about the possibility that a storm might come our way lol. I don’t think I am asking to much of Mother Nature.

Yeah we keep missing out in Levin. I look at the thunderstorm warnings and they show high risk for storms and nothing. I am a Brisbane girl and grew up with the big wild Queensland summer storms and I can count on 1 hand how many storms I have seen since I moved here 5 years ago. 🙁

I have been in the thunderstorm business for about 30 years or so and don’t talk to me about the times I have missed thunderstorms or being in a place at the wrong time. I remember back a few years ago, we hadn’t had a thunderstorm in ChCh for 18months, then I went up to Wellington. The next day after I left, there were 3 thunderstorms in a row in ChCh. I couldn’t believe it. To me, there is nothing like a good thunderstorm on your own ‘backyard’ rather than going elsewhere where thunderstorms maybe a plenty, just like going to the USA to see tornados when you can see them here. I’m so envious of all those recent thunderstorms over the North Island, I hope it’s the SI’s turn next time,especially on the east side.

I feel the same way watching all the news about the storms when there is nothing happening in Christchurch!!

Would you believe that the last time I was in Chch a thunderstorm happened on the day I left?  It was in early December.  I couldn’t believe it!  Mother Nature is definitely playing with me!

Yes I feel the same way, as I could the storms form and mover away. But hay thats life…..

It’s so nice to know I’m not the only storm freak lol I too was feeling the same when Tauranga had their huge storms before xmas with that fanatastic hail. Ngongotaha is less than an hour away, how could we possibly miss it????? lol

The amount of times I too sit watching the tracker getting all excited as the dots get closer, checking the clouds outside, only to have the storms go either side of us lol

But then it finally happened ….. we had the big storm on Wednesday night and it was a boomer! I even managed to video some lightning shoot across the paddock, across the road. It was great but also very dangerous …. as I discovered the next day when I checked my video clips …. what the naked eye didn’t see was the lightning grabbing the power pole at the foot of our driveway lol

So hang in there Kellie …. it may not happen over night, but it will happen lol lol

I too awaited eagerly for a good storm and was disapointed to find we didnt get alot here in Tauranga. Although i did see some good strikes over the kaimais. I understand how you feel i just love storms and would love to learn more..

We only really got one on thursday afternoon,a few peels of thunder and 2 flashes of lightning in sth auckland.