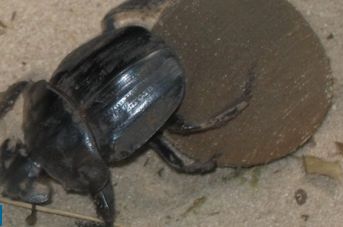 Exotic dung beetles cleared for release in New Zealand could become flying “faecal bombs”, says a review of belated research into health risks from the insects.

Two of the 11 species approved for release without controls are night flyers. Scientists who have challenged the release say the beetles have the potential to spread disease by flying towards town lights and coming into contact with babies or elderly people with weak immunity.

The review of a 100-page official health risk assessment says government investigators who concluded that dung beetles pose only a minor disease threat have got it wrong.

The review says: “The introduction of new species of dung beetles that are attracted to lights throughout New Zealand is akin to lobbing small ruminant faecal ‘bombs’ one after another from our farms many kilometres out into cities.

“It is highly improbable that these faecal-contaminated beetles will not eventually end up in the hands or mouths of immunologically naive individuals.”

Compiled by University of Auckland dean of science Professor Grant Guilford, the review summarises comments of scientists sought by Dr Guilford and which challenge the conclusions of the Environmental Science and Research health risk assessment.

Whereas the ESR report found that the beetles would not cause more disease, the Guilford review concludes that “dubious assumptions” made by the ESR team regarding the insect’s biology caused them to underestimate the risks to people from dung beetles.

The review took issue with the level of disease risk from contaminated water sources and beetle predators such as birds, livestock and pets causing infections in people. It also says the health risk assessment contained a “fundamental flaw” in discounting the potential impact on communities from flying beetles.

Professor Guilford would not identify the team who reviewed the ESR report, saying that “as per usual with peer assessments of science the reviews are undertaken in confidence. This is done to ensure the comments [or] criticisms stand on their own without fear or favour.”

ESR epidemiologist Dr Graham Mackereth, one of the authors of the health risk assessment, said it was difficult to respond to the Guilford review without seeing published comment, or knowing who was consulted.

Dr Mackereth also pointed out that two named peer-reviewers had published their views about the ESR work.

He did agree an assessment should have been done before release but rejected the review’s conclusion that the risk had been underestimated, saying: “We stand by our report. Full stop.”

I searched the article to find out why dung beetles would be released in the first place but could see no reason. Please explain.

I believe introducing dung beetles is to help break down animal poop on farms. Watch here: