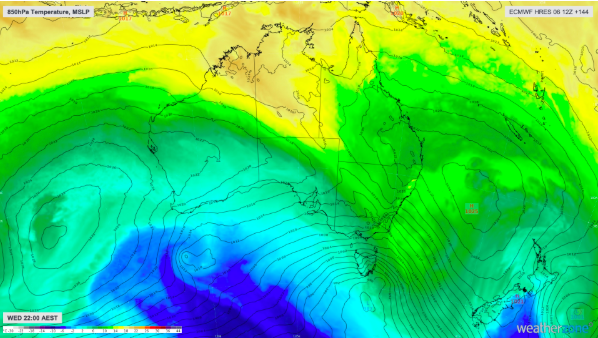 Unseasonably warm air will return to southeastern Australia during the next several days, ending the region’s chilly start to winter.

A series of cold fronts brought a string of cold days and nights to Australia’s southeastern states during the last fortnight. For some areas, this wintry spell included the coldest and snowiest weather this early in the season since the year 2000.

But while southeastern Australia was experiencing this burst of cold weather during the last fortnight, much warmer air was lingering over other parts of the country.

Maximum temperatures in some parts of Western Australia were five to seven degrees above average during the first six days of June. Perth Airport’s six day spell at or above 22.8 degrees during this time was a new record for June.

Now, this warmth is making its way back towards southeastern Australia as a series of cold fronts target the nation’s southwest.

Hobart is forecast to reach 15 to 17 degrees during the next seven days, well above its June average maximum temperature of 12 degrees.

While Melbourne usually reaches tops of around 12 degrees at this time of year, the mercury is tipped to hit 16 to 19 degrees between now and next Thursday.

In Canberra, five of the next seven days are forecast to reach at least 15 degrees. The city only had three days over 15 degrees last June.

Temperatures are expected to reach 22 to 24 degrees in Sydney between Sunday and next Thursday. This would be the city’s first five days spell at or above 22 degrees on record during June, with data available back to 1859.

The looming warm air is also likely to melt some of the thick snowbase that built up on the alps during the last fortnight. However, with over 70cm cover in some areas, it certainly won’t disappear completely.

Perth should only reach the mid to high teens during the next seven days, which is a little cooler than usual for early winter.

Is there a reason why you talk about how cold it was in terms of ‘a chilly start’ but talk about the warmth in terms of exactly how many degrees above normal it was or will be?

Hi Bart, yes because the warmer than average part is the news worthy part. You can have a chilly start but still be warmer than average – or bang on normal. When we get maps showing colder than average weather we display them and write stories on them. But 2019 isn’t delivering as much of that – it’s frequently driving in above normal days in many areas. We’ll happily be more detailed when it swings the other way. We’re just reporting on weather news.