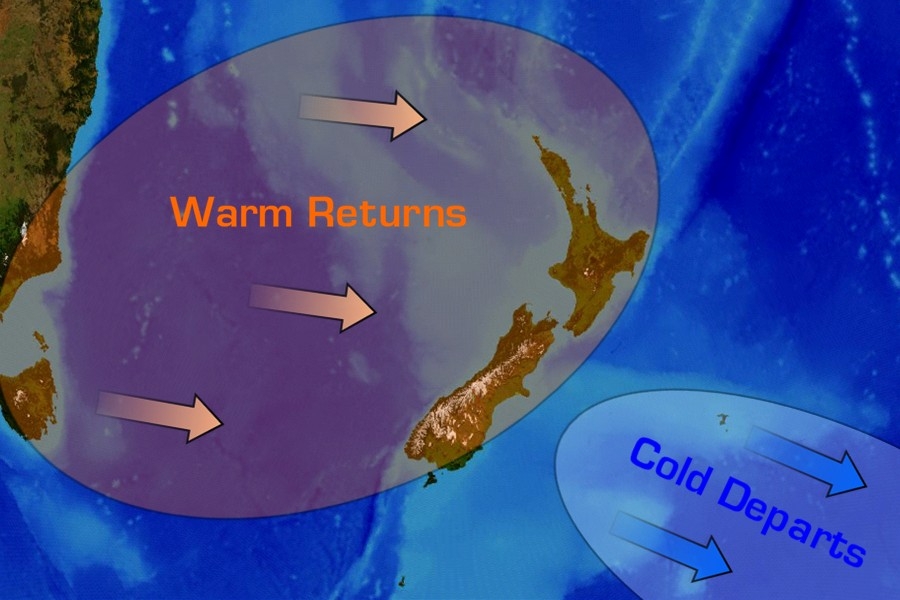 It’s been a cold few days with snow falling as far north as Mt Te Aroha in the Eastern Waikato last week and ice on cars in Auckland on Sunday.  The burst of cold air was a shock to many bringing July like temperatures after the warmest August on record.

For those who miss the warm weather there’s good news on the way as the high slowly slips out over the Pacific Ocean and behind it a northerly flow will develop – killing off any southerly that still remains (now confined to Hawkes Bay and Gisborne).

Daytime highs are going to creep back up in to the late teens and possibly early 20s for those in the north and east of the country with mid teens for everyone else.

Already today temperatures have risen to around 17 in the north of the North Island and 15s and 16s in the bottom half.  A fairly breezy northerly has already arrived in Wellington.

In the South Island the winds are still coming in with an easterly slant – nor’easters common place across Canterbury keeping temperatures fairly low, around 12, however a little further south and the northerly (warmer after passing over land) has boosted Dunedin to 18 degrees.  It’s 15 in Oamaru and Invercargill.

Frosts are also expected to disappear with perhaps only a few isolated, inland, areas getting frosts tonight in the central North Island and possibly Waikato and Gisborne.