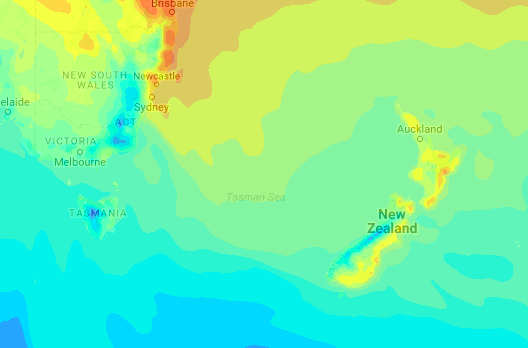 This week some southern parts of the South Island had snow, hail and even a touch of frost. This weekend, however, you can thank Australia for things warming back up – in both islands.

In fact places that struggled to even climb out of single digits this week will this weekend push closer to 20 degrees during the day and by Monday may well be in the low to mid 20s. Even some well-inland North Island rural areas saw frosts this week – but not this coming week.

The air flow is a return to the ones we saw in August and September – tropical air spilling into Australia’s desert, then out over the Tasman Sea towards New Zealand. It’s short lived but will give a burst of warmer weather starting this Sunday and peaking early next week.

Much of next week sees westerlies so a mild week is on the way for most places – but some may still be a little cooler tonight and Saturday.

Dry weather also looks set to dominate most places next week – with the West Coast the highest candidate for rain or showers. A large high will push in from Brisbane to near Cape Reinga in New Zealand, helping encourage a dry week for the North Island and more west to north west winds for the South Island and Wellington region.

– Image / Monday afternoon shows the warm affect the west to north west flow from Australia has on northern and eastern New Zealand / Weathermap.co.nz