Home > News > Warm out east tomorrow, some cloud in th...

Warm out east tomorrow, some cloud in the west 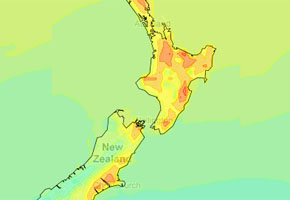 Tomorrow we’ll have a westerly airflow over the country and eastern parts from North Otago right up to Gisborne are expected to have mostly sunny conditions with warm temperatures, the warmest of which will mainly be about Canterbury and Marlborough with high’s between 25 and 26 degrees likely.

The Bay Of Plenty will not miss out on a nice day though, being a bit more on the eastern side of the North Island will mean it is more sheltered from cloud and westerly breezes.

For Auckland there should be sunny periods about during the day but expect some cloud also which will thicken up a little in the evening. Similar conditions are expect about most western districts tomorrow with winds tending a little more northwest in Wellington and southwest on the West Coast of the South Island.

The most extreme type of weather tomorrow will come in the form of strong westerly winds about Southland, there is a chance they could gust to gale force on the coast especially in the morning. Winds will then ease late afternoon.

The westerly has been blowing up to gale force today about the coast but a sunny afternoon all the same.

Yes the westerlies were indeed expected to be strong in Southland today.