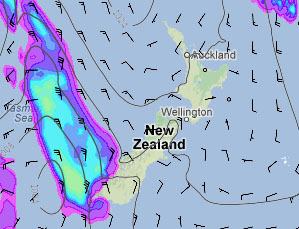 Well it’s the same old scenario returning for the start to the weekend, a northwesterly airflow building over New Zealand with a front approaching the country in the Tasman Sea. It may be old but it doesn’t mean it will be a boring day, it will be very nice especially in many eastern areas with a summer like quality in the air.

Expect temperatures on the South Islands east coast to be warm, there will be some high cloud also. The airflow will tend more west to southwest over the North Island with mostly sunny weather there too, although there could be some cloud morning and night about western areas. On the east coast in the North Island winds will tend northeasterly.

Rain will fall in Fiordland tomorrow becoming heavy in the afternoon before easing at night, showers spread into North Westland and Buller from late afternoon or evening.

The later half of Sunday is where things start going downhill for the North Island as the front mentioned above moves in, late on Sunday southerlies freshen about the South Island’s east coast bringing some rain.

Models at this stage are suggesting areas of lower pressure about New Zealand for the whole of next week so slightly more unsettled weather can be expected, however depending which way the wind is blowing you may be lucky and end up with sunny weather on some days. As always keep an eye on WeatherWatch.co.nz for the national forecast every morning at 5am and the main centre forecasts for Auckland, Hamilton and Christchurch.